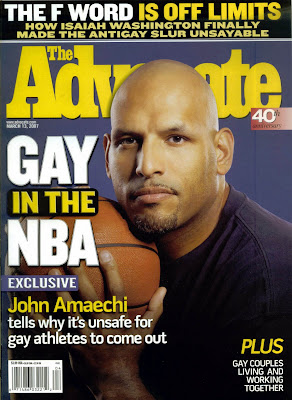 At the NFL Combine, there was speculation over the sexuality of Notre Dame linebacker Manti Te’o. And his answer, “far from it, farrrrrrrrr from it” on Katie Couric actually didn’t help things. It just reeks of over-compensation. And Te’o is Mormon, which is so strict it’s like…if Christianity is cocaine than Mormonism is crack.

But this isn’t about just Te’o. Earlier this week Colorado tight end Nick Kasa admitted that during the NFL combine a team asked him if he “liked girls”. Because of Kasa’s comments, the NFL is looking to investigate whether or not there is any truth to Kasa’s claims about questions he was asked during the combine. And now, Michigan State running back Le’Veon Bell is reporting that he was also indirectly asked about his sexuality. h/t Down and Distance

This comes off the heels of a recently retired NFL veteran being out after a fight with his boyfriend over soy sauce led to legal charges.

So when will we see an openly gay male athlete in one of the four team sports?

I think sports may lag the rest of society here, and it could be a long time before we see an openly gay male athlete in the NFL, NBA, MLB or NHL- mostly because of the atmosphere, reputation and language of the locker room. Of course, I regard that as a travesty because if you can integrate lifestyle differences in the military -an even bigger bastion of so called manliness- you can do the same in sports.

Because of people like the harassing idiot I observed at a sporting event, it will take a long time. A fan clad in a St. Louis Cardinals jersey was insulted by a moronic Cub fan shouting, “the Cardinals?!- we know who’s gay here.” That’s exactly the culture that must be eradicated (see the Hillary Duff Public Service Announcement below for another example) in order for this to happen. Too many people (especially sports fans) use the word “gay” as a put-down.

To use that word for something found detestable is the ultimate slap in the face to homosexuals. The first openly gay athlete will certainly encounter bigotry, abuse, insults, hate crime, and death threats beyond the imagination. Jackie Robinson had unspeakable acts perpetrated against him; so will this trailblazer. Tim Hardaway reminded us of that in 2007. So did that no-name 49ers cornerback at Super Bowl media day 2013.

Of all the leagues, I still think the NBA will be the first to have an openly homosexual player for a few reasons. Dallas Mavericks owner Mark Cuban (always on the lookout for how he can draw more attention to himself) has already made the promise he would sign the one to his team.

Former New York Knicks coach/GM and Detroit Pistons superstar Isaiah Thomas has said that not only would be accepting of a gay player in his locker room, but he would be the first to cut anyone who isn’t. The NBA has a higher representation of racial minorities within its fan base than the other three sports, and these fans, who have encountered bigotry and intolerance similar to the gay community, would likely sympathize.

Finally, the Association also once had John Amaechi, the most high-profile of gay male athletes, who came out after retirement. My prediction is the barrier will be broken by a franchise located on one of the coasts, perhaps the Northeast where people are often more progressive on social issues. And it will likely be in a city with a large gay community.

Question for the Panel While attending The Progressive magazine’s 100th anniversary conference in Madison, Wisconsin, a panel on sports and social issues was held, and it was there I posed the question of this column to the speakers.

Sportswriter Dave Zirin is the author of four books and his column, Edge of Sports, appears on Sports Illustrated’s website. He is the host of XM satellite’s weekly show, Edge of Sports Radio. Zirin, a frequent op-ed writer for the Los Angeles Times, told the room about the Isaiah Thomas anecdote and answered my question thusly:

“I don’t think an owner would be decisive in the least; I think the coach would be decisive. An idea of putting tolerance over winning, that’s what it would take. And it would set a tone for a team and for a league that would make it very hard to ignore.”

“I don’t see things that we’ve talked about here changing in my lifetime, but then again I didn’t think we’d see a black president either.”

“I think the culture of the locker room is more influential than the decisions of an owner…LeBron James and some other folks have been kind of commenting in negative ways about the idea of having a gay athlete on their team. Until those kind of attitudes start to change I don’t think an owner would make a difference.”

“I think in the next couple of years you’re going to have an out gay male athlete for no reason other than people have cell phone cameras and some photos are going to be taken of people on the down low, and they’ll have to come out. The first prominent female athlete, Billie Jean King did not come out by choice, and I think you will see something similar,” Zirin said.