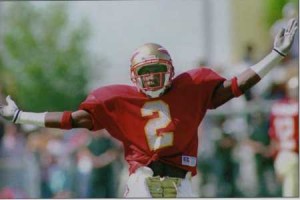 The number two really defines a certain two-time unanimous college football All-American, the electrifying Deion Sanders. His #2 was retired by the Seminoles. The man with two nicknames “Prime Time” and “Neon Deion” was a critical force in Florida State‘s historical run under Hall of Fame Coach Bobby Bowden, and today the National Football Foundation and the Hall of Fame recognize his achievements.

Sanders, or $anders as he would often spell it, later became a two-way player in the NFL (well part time on offense, as he played wide receiver for a little bit), and seems to present two personalities to the public.

There’s the brash, calculated, and well marketed persona; then there’s who Deion really is. It’s a shame CBs can’t wear single digit numbers in the NFL, because retaining #2 would have been perfect for the Ft. Myers, FL native. But #21 wasn’t bad either for this football dual personality (maybe you could call him a two sport star) who became the first person to ever play in the NFL and MLB on the same day. Sanders won the Thorpe Award as the nation’s best defensive back and finished eighth in Heisman Trophy voting in 1988 and also led the nation in punt returns that season.

In the NFL, he became one of the most dangerous return men in history. A lot of teams were afraid to kick to him, and I love hearing him refer to the Chicago Bears Devin Hester (the greatest return man in NFL history) as “my baby” on NFL Network broadcasts.

Sanders is tied for third in FSU history with 14 career interceptions and shares the school record with four interception returns for a touchdown. His 100-yard return against Tulsa in 1985 is the longest in Florida State history. He helped the Seminoles to four bowl wins and led Florida State to the first two of 14 consecutive AP top five finishes.

Selected fifth overall in the 1989 NFL Draft, Sanders enjoyed a 14-year career for the Atlanta Falcons, San Francisco 49ers, Dallas Cowboys, Washington Redskins and Baltimore Ravens. During his career with the first three teams, opposing QBs feared him so much, they would often not even throw to his side. $anders was so fast he could bait opposing quarterbacks. Yes, he was an extremely rare breed of cornerbacks that had such transcendent closing speed, he could make them think the receiver was open, only to come back and snatch the ball away.Of course, his career with those final two teams is extremely forgettable as Prime Time was way past his prime. He was also known as a DB who was afraid of, or didn’t like to tackle. His poor tackling skills made him often try to force opposing players out of bounds.

A 2011 Pro Football Hall of Fame inductee, he played in eight Pro Bowls, was named the 1994 AP Defensive Player of the Year and won two Super Bowls. A multi-sport star, Sanders also played nine seasons of Major League Baseball for the New York Yankees, Atlanta Braves, Cincinnati Reds and San Francisco Giants. The outfielder compiled 558 hits in 641 career games and won the 1995 World Series with Atlanta. He is the only player in professional sports history to win a Super Bowl and a World Series.

Sanders currently serves as a color commentator and studio host on NFL Network and operates Prime Time Achievers Summer Camp, a non-profit organization which provides athletic activities to young boys and girls. My favorite part of the NFL Network’s highlights show is Deion’s special montage segment; and when he utters his trademark phrase “pay the man.” $anders will always be remembered for his trademark high step, his ostentatious end zone celebrations, and one TERRIBLE rap album. (Although this tune, will no doubt get you out of your seat!!!) All that time hanging with Hammer didn’t help Sanders….oh wait, it was Hammer why would it? Still $anders is an all-time ’90s pop culture icon and BY FAR my favorite athlete as a child.

Notice I said “favorite athlete from childhood, not “boyhood hero” or “idol.” Athletes aren’t role models to me, and for most, they really shouldn’t be. However, I have to thank Deion for helping me develop my love of: dancing, showing off, being arrogant, and having an obnoxious personality.

He also made a lot of clever commercials including this one (Nike “Dallas” parody).

Sanders is also a member of The Sporting News’ All-Century Team and the Sports Illustrated All-Decade Team.