Before former Chicago Bears quarterback Jay Cutler signed with Vanderbilt to play his college football, he strived to stay closer to home. The Santa Claus, Indiana native, who grew up a Bears fan, wanted to go to Notre Dame, but they weren’t interested.

Purdue wanted him, back in 2002 when Cutler was coming out of high school, but the Boilermakers coaching staff envisioned Cutler as a defensive back instead. Illinois offered him, Jay accepted, but then the staff told him he was lower on the priority list at the position. It proved to be a terrible mistake as then coach Ron Turner suffered through a 1-11 season in 2003, and then found himself out of a job after a 3-8 campaign in 2004. Jay Cutler appeared on the podcast “Pardon My Take” this week, and he once again neither confirming nor denying the infamous DOOOOOOOON’T CAAAAAAAAARE story (the version told to him by the hosts, differs slightly from the version told to us by our eye witness, but bare in mind that story is over a dozen years old now).

After this conversation he opened up about his college recruitment.

“They don’t really recruit right there, in the midwest that much,” the southern Indiana native said of his first choice, Notre Dame, not showing interest in him.

He then told the pod hosts that Purdue wanted him to come, but to play safety, not quarterback. Then came the tidbit about the Turner era Illini.

“They offered me, I accepted and then they called a week later and said ‘there’s this kid from California he wants to come, and we want you to take the first semester off and then come in in January,” Cutler said. 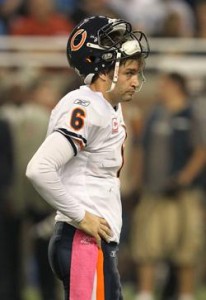 “And that Vandy called and I had nothing else going on.”

None of the quarterbacks who threw a pass for Illinois in 2003 and 2004 (Jon Beutjer, Chris Pazan, Brad Bower, Dustin Ward) hail from the state of California; they’re all from the Land of Lincoln. So who was the coaching staff talking to Cutler about?

It’s Matt Dlugolecki, who is from Rancho Santa Margarita, California. He de-committed from UCLA to go to the University of Illinois, and he’s the same high school graduating class (2001) as Cutler. Dlugolecki, who never made any impact at all with Illinois, later transferred to San Diego State where he was the QB1 for three seasons.

Fun fact: his cousin is former Irish QB Ron Powlus, who was instrumental in selling Turner on moving towards Dlugolecki and away from Cutler. Whether Cutler is referencing him directly or not, or whether or not the Illini coaching staff were giving him the run-around, we know with 100% certainty that Illinois whiffed on this one.

They didn’t even get anything out of ‘that kid from California’ and the next few years of QB play were just brutally awful.