Here it is- THE BIG ONE! Of all my 77 in 77s, this is my piece de resistance. The team I cover the most, Chicago’s home college football team, the program covered in the media unlike any other. Yes, the Notre Dame Fighting Irish, the most storied and well-documented team in the history of the game. This preview will be longer than the others, so let’s get right to it.

Storyline #1 QB controversy: Crist has risen, announced two days ago. (For more on that go here)

Coach Brian Kelly on the situation: “Dayne (Crist) overcame a serious knee injury just to be able to start the season (in 2010). He had another serious knee injury. He got himself ready for the spring and fought through the uncertainty of that as well. Then, the work in the summer and preseason , and it puts it in perspective. He is a much better quarterback. He’s the kind of guy I want to coach.”

Go here for a podcast previewing the 2011 Notre Dame season 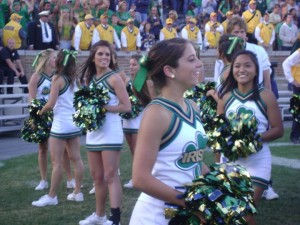 Other depth chart updates:  Chris Watt will start ahead of Andrew Nuss at left guard, Dan Fox starts ahead of Carlo Calabrese at inside linebacker.And there’s no differentiation between the #3 and #4 quarterbacks, Andrew Hendrix and Everett Golson.

We knew this already, but Kelly reiterated Tuesday:

“Cierre (Wood) is the featured guy (at running back), and Jonas (Gray) has a role – he’ll give Cierre a blow. Jonas’ role will be based on his production.”

Storyline #2: Michael Floyd’s off-season drama, reinstatement into the program. Not even going to link a story here (even though you know I’m all about doing anything in the cause of both SEO and self-promotion) You’re tired of reading about him.

The major storyline now? ND is somehow both overrated and underrated. Making them I guess “rated.” Seriously, haters say because it’s ND they’re way overrated this year (take a look at the five polls I quoted at the end here). Lovers say they’re getting hated on, and this somehow makes the Irish underrated because pundits are overrating them because of the tradition. Let’s just start the season already and find out. 2010 was: a year of incremental progress on the field, overshadowed by tragedy and serious issues off of it. Declan Sullivan and Lizzy Seeberg were literally matters of life and death, not win or lose. And we covered those stories in depth at the time. Back on the field, a 1-3 start became 4-5, became 4-0 with back up QB Tommy Rees at the helm) down the stretch. Included in that was the first win over hated rival USC since 2001 and just the second bowl win since 1993. Also they suffered a ridiculous amount of injuries at the offensive skill positions, but endured to go 8-5.

BMOCs: Crist and Wood of course, also OL Braxston Cave and Zack Martin. NFL talent at TE with Tyler Eifert. Should he stay healthy, WR Michael Floyd will break all of the major school receiving records by the end of the year, even Golden Tate’s records. (For more on the passing game go here) He should also be a second round NFL pick; like Tate. Floyd came into 2010 with a “Mr. Glass” type reputation due to all his injuries. He stayed healthy last year and produced. Now he comes in with a trouble-maker down to his last strike with the University reputation instead.

Senior defensive end tandem Kapron Lewis-Moore and Ethan Johnson were named preseason candidates for the 2011 Ted Hendricks Defensive End of the Year Award. Lewis-Moore and Johnson are one of three sets of teammates to appear on the list of 35 players. The other two are North Carolina’s Quinton Coples and Donte Paige-Moss; and USC’s Wes Horton and Nick Perry.

The overall strength of this team is the front-seven (more on that here) Certainly the top NFL prospect on the entire team is Manti Te’o, who starts at inside linebacker alongside Dan Fox. Carlo Calabrese, who started last season, will see a lot of time, splitting reps with Fox. Safety Harrison Smith is up for the Thorpe Award honoring the nation’s best DB.

Go here for more on the defense

2011 will be fruitful if:The secondary and the 92nd ranked last season running game (go here for more on that) do their part. The pass defense could use some improvement too. Kelly had an interesting quote at media day that summed it up

“I think the final piece of that is the veterans. We talked about Darius Fleming. Kapron Lewis-Moore is a different football player. Gary Gray, Robert Blanton, our safeties. They are so much more mature and physical as football players.

Then offensively if there was one guy that we would pick out in camp, it would probably be Cierre Wood in the sense that he’s really been complete. He wasn’t complete, as you know, as a player. In terms of blitz pickup, catching the football, running physically, he’s been very impressive, as well.

Pretty much covered it, didn’t I? Could there ever be another question after that (laughter)?”

2011 will be awful if: the injury bug bites again at the offensive skill positions. They are razor thin in tailback depth. In 2010, they lost three major pieces in Rudolph, Allen and Crist for the year around midseason.  That cannot happen again. Again Kelly explains why:

“Question was asked about the defensive line. Defensively at the linebacker and defensive line position, we feel like we’ve got enough depth there that we can roll out the next guy.

Our shortcomings are going to be on offense after that next level.

We’re really thin offensively in the depth of our football program. So if you’re looking at where the perceived weaknesses are in the program, it’s through recruiting and that skill position. That’s got to be addressed.

We had to come in immediately and address the defense. That was easy. We knew where we had to go immediately, and that was on the defensive side of the ball. These next couple years are going to be focused on building depth in those skill areas. After those guys, we haven’t had any guys that are ready to step up into those roles.” Bottom Line: Less than a double digit victory season is unacceptable. But this year is about getting in the BcS, and winning their first BcS bowl since well, ever. Expectations are always high in South Bend. But this year even more so. And they should be. In this era, coaches can win it all in their second season, most recently Bob Stoops did. But the third year is what’s magical at Notre Dame- Ara Parseghian, Lou Holtz, Frank Leahy, they all won championships in their third season.

Go here for a podcast previewing the 2011 Notre Dame season