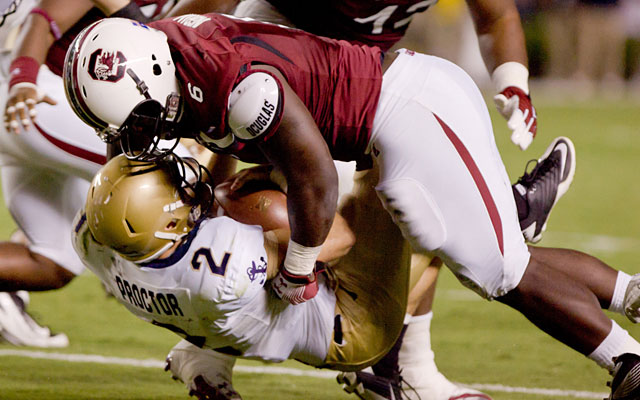 1. Melvin Ingram, South Carolina (6-2, 264): One of the most versatile defensive lineman in the draft, Ingram could play in both the 3-4 as an OLB or speed DE, as well as play the traditional 4-3 defensive end. Ingram has pro-ready hand technique and frequently gets his man off balance.    Prediction: Top-15

2. Quinton Coples, UNC (6-6, 284): Has ideal height and size, and ran well at the combine. His pass rush skills might be the best among the position, and was extremely productive in his Tar Heels career. Coples actually dominated more as a DT in 2010, and could still play there on passing downs. His struggles against the run drop him down to second on this list. If he can improve in recognition and angles to the backfield, could be the best DE to come out of this draft.   Prediction: Top-15

3. Courtney Upshaw, Alabama (6-2, 272): Upshaw is shorter and heavier than the average DE prospect, and might be better suited playing in the 3-4. Plays the run well, and is above average rushing the passer. Did not miss a game in college due to injury. Scouts will love his nasty streak.      Prediction: 1st Round

4. Chandler Jones, Syracuse (6-5, 247): Jones needs to add weight, but he has tremendous upside. Extremely athletic and fast, he has the frame to get as big as 275 pounds. Injuries cost him five games last season, but with a good training staff and strength coach, he could become a great player.     Prediction: Late 1st, Early 2nd

5. Whitney Mercilus, Illinois (6-4, 261): A physically imposing player who is quick at the snap. Plays well within his gap against the run and shows a natural ability to get to the quarterback. Played in both the 4-3 and 3-4 fronts at Illinois, but will likely not translate to an OLB in the pros.    Prediction: Late 1st, Early 2nd 1. Dontari Poe, Memphis (6-3, 346): Finding a true nose tackle is extremely difficult, but Poe certainly fits the bill. Poe has great size and strength, and surprisingly plays bigger than his frame would suggest. Memphis coaches called him the hardest worker on the team, and he did extremely well in his Combine interviews, showing teams his passion for the game.    Prediction: Top-15

2. Fletcher Cox, Mississippi State (6-4, 298): Sealed the 2nd spot on this list with an excellent Combine performance. Has elite quickness and speed for the position. Shows a good motor but still must improve his use of leverage. Cox has good upside and will only improve under pro coaches.    Prediction: 1st Round

3. Michael Brockers, LSU (6-5, 322): Arguably the best run-stuffer among this year’s class, he clogged up the middle on a regular basis for the Tigers. Still has room to improve as a pass rusher. The LSU coaching staff raved about his work ethic and passion for the game.     Prediction: 1st Round

4. Jerel Worthy, Michigan State (6-2, 309): He was extremely productive at MSU during his three-year playing career. Worthy is not an overly imposing DT, and can get washed out while rushing the passer. He will fit in extremely well in a two-gap system where he can use his quickness to get to the running back.     Prediction: Late 1st, Early 2nd

5. Devon Still, Penn State (6-5, 303): Still was very productive for the Nittany Lions, and has the physical tools to be a potential Pro Bowler. The problem is, Still can also look like a reserve because of his inconsistent motor. There were a number of off the field issues. In 2008, had a teammate pull a knife on him and police found marijuana in his apartment in 2009 (was not charged).      Prediction: Late 1st, Early 2nd