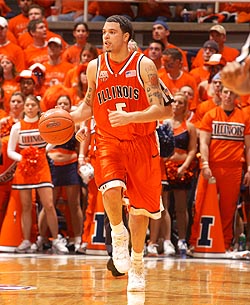 When putting together an All Decade Team, our first effort was Nick Smith, at guard, forward, and center. Nick Smith all the way baby. So obviously someone spiked our Egg Nog with opium or something. Eventually we decided to take the job seriously and put this together; a collection of our favorite memories surrounding the players the three of us deemed all decade.

Deron Williams: Lots of great memories of Deron. I specifically remember the game he came back after breaking his jaw during his sophomore season, and scored 30 points with his jaw still wired shut. That game was also notable because it was the infamous Wisconsin/Illinois game where the Illini wore orange and the Sconnies wore red, and no one on TV could tell who was who.  Might have been why he scored 30. That game showed just how powerful and fast Deron could be.  Plus, it marked the day that I learned how to correctly pronounce his name. –PS

Is it cliché to recall the Arizona game? When Deron  turned it on in the second half and took them to the Final Four? Maybe it is, but I don’t care. I was a senior in High School that year and had to work that night. I snuck into the bathroom to call my friends for game updates, the answer was a consistent “it doesn’t look good.” I finally got home to watch the second half and saw the whole thing unfold.   He made the shot to tie the game. He made the 3s to put it away. DWill had 22 points, with five 3’s in the second half of that game. Given how poorly he played early on, its still a wonder how he and the team pulled that one out. –JK

My one and only man-crush was born that night. I was there, live, in the absolute last row of All State Arena for the “Rosemont Resurrection” (hey it was the night before Easter), the “Mannheim Miracle”, the “Nail-biter to Nellyville” (Remember the Final Four was in St. Louis) –PMB

Dee Brown: Dee’s performance his senior year against Michigan State is unforgettable. Dee scored something like 1593 points in the first half, just raining threes down on the Spartans, including a shocking 30 foot three that beat the shot clock right at the end of the first half. Dee finished that half, seriously, with 23 points, ended the game with a career-high 34 points, and I had what can only be described as an unforgettable experience with my mom, who I went to the game with because my dad was out of town. –PS

The 05 Big Ten Player of the year in 2005 is still the one most closely identified with the Fighting Illini. I don’t know if there is a specific memory I have about him that stands out, above the others, the plays against Wake Forest, the jersey pop at Purdue (yes, Illini fans will go to their graves claiming Dee invented it.) But man oh man, the speed of Dee was unbelievable, they didn’t call him the human fast break for nothing.  He was the prototypical Bruce Weber player, amazing shooter, excellent passer and merciless defender.  I think it was the sneakers. –JK

His “poppin the collar” photo will encapsulate how all of history remembers him. Just like how a single Che Guevara photograph is the only one that ever comes up whenever anyone mentions Sr. Viva la Revolucion! –PMB Frank Williams: It’s the Illini’s version of the Reggie Miller game in Madison Square Garden, but it came at our own little House of Horrors, the Barn, up in Minneapolis (side note – why, oh why, was the Metrodome and The Barn like kryptonite to the Illini? I’ll never understand).  Down 66-62 with under 15 seconds left, Minnesota tried to inbound the ball, and Kevin Burleson couldn’t quite handle it, letting the ball squirt away to Cory Bradford, who drained a three.  On the next inbounds play, the Illini again trapped Burleson, and forced a turnover with 6.9 seconds left. Enter Frank Williams. He received the inbounds pass and slashed his way to the hoop, hitting a game-winning layup with 2.9 seconds left, giving the Illini the win, a share of the Big Ten title, and one of the few Illinois moments this decade where I can remember shouting, “OHHHHHH!! I DON’T BELIEVE IT!!!”  How do you know it was a Frank Williams type game?  That basket was his first basket since the 2:20 mark of the first half.  And if disappearing for 22 minutes of basketball doesn’t remind you of Frank Williams, then heck, you weren’t watching.

The Big Ten Player of the year in 2001, Frank Williams led the Illini to the Elite Eight and much like Deron Williams is a standout player that basically every point guard at Illinois will have to try and live up to (sorry Demetri.) In ’01, the Illini won the Big Ten and earned a #1 seed in a year where Frank scored over 500 points for the second year in a row.  I still think we were robbed against Arizona that year, and having to hear Bill Walton call a game in which his son played still really irks me. James Augustine: He played nine minutes in the championship game.  I actually thought I was exaggerating that fact, but I wasn’t. (link: https://www.fightingillini.com/sports/m-baskbl/stats/2004-2005/game03.html)  HE ACTUALLY PLAYED ONLY NINE MINUTES.  There’s lots of reasons why we lost the title game, including the fact we chose that moment to shoot 40 three pointers, but the fact our starting center played NINE FREAKING MINUTES DIDN’T HELP.  He must have found Sean May attractive, because every time he was on the court he couldn’t keep his hands off of him.  I hope they’re really happy together. Congrats, James, you’re on the first team. –PS

The guys at TheSportsBank probably won’t forgive me for putting Augie on the first team because of his foul trouble in both the Arizona game and the National Championship game. Whatever man, its Augie, the all time effing rebounder in team history, by about 200. Not to mention of course his killer run in the Big Ten tournament in 2005. In the same game where Jack Ingram threw down those Big 3’s, Augie made two monster dunks to beat the Badgers in Wisconsin and break their home winning streak. –JK

I know quite well how impressive Augie’s body of work was from the time he left Lincoln-Way in New Lenox (SICA!) till he played his final game in Champaign, but….in two of his final three collegiate games he helped make Sean May look like Wilt Chamberlain and Channing Frye like David Robinson. And his cup of coffee that was his NBA career did nothing to erase my negative memories of him. –PMB Brian Cook: I felt a little bad for Cook, because I knew his game really wouldn’t translate to the professional level. But he was the Big Ten Player of The Year in 2003, fourth all time in Illinois scoring history, and averaged over 20 points per game his senior year. I’ll never forget his 30-point effort against Michigan, when he scored 23 points in the second half, and I think all were in the last ten minutes of the game. He single-handedly brought a team full of freshmen that you might have heard of back from an 11-point second half deficit (here’s a hint, three of those freshmen are right on this first team).  Quite simply, he was the most underrated player of the decade, and perhaps the decade MVP.

Dee and Deron were amazing, but I can tell you that no player was more dominant in the conference than Cook his senior year.  He is the only player on this list to have played with every other player, first and second team All Decade, and he is better than all of them. As great as the three guards were, even they relied on Cook to sit under the basket and just humiliate whoever had the awful task of guarding him. He made the other teams look silly in that year’s Big Ten tournament,  and I swear to you that if for some reason Brian Cook could have been around for the 2004-2005 season, there is no question they would have won the National Championship that year.

Luther Head: Outside of his personal problems early in his career, I’ll never forget his three in the National Championship game to tie it up with 20 seconds left that was dead on…but just long. Sorry Luther, it’s what I remember!  I still love you though.

Cory Bradford: I can’t think of anything…oh wait, his insane three-point streak!  That made his freshman and sophomore year teams a lot of fun to watch even though they weren’t all that special. And then there’s the time he was on fire like that old NBA Jam Session arcade game in the 1999 Big Ten tournament. He didn’t seem to miss from behind the arc during four straight games that came close to redeeming an otherwise awful season. Brian Randle: I can’t help but think what might have been with his career had he not been utterly insane, and punched a wall or a water cooler or whatever it was early in his career…breaking his hand and ending his 2004-5 season. Could the Illini have won a title with the sophomore Randle?  We’ll never know…but I hate the speculation. And Am I the only one who thought he looked exactly like a young Gregory Hines? Yes, I stole that joke from my 45 year old brother-in-law Craig. Roger Powell: Would you believe I have no memory of Roger Powell doing anything on the court? That in itself, however, operates as a memory. He was the consummate blue-collar, team player; a guy that didn’t give a crap about his stats, but would compliment his team and provide whatever they needed him to. On a team with at least 3 big-time stars and a fourth guy in Head that was a little bit of a gunner, they needed someone like Powell to succeed.

Robert Archibald: Other than his AWESOME accent, my #1 memory was him shooting like 50 free throws in the loss to Arizona during the 2000-01 season. He missed only one, and kept the Illini in a game that they had no business being close in.  You know, because of the refs.

Dishonorable Mention: Shaun Pruitt- yes, he did a lot of things well, but the fact that he couldn’t shoot a simple free throw if his life depended on it cost us so many games over the course of his career that he just cannot be exonerated.

Eric “Basketball Judas” Gordon- yes, it was just one season, and most of Illination has forgiven him, but every time a player breaks his commitment to go sign with a hated a rival, it will be called “pulling an Eric Gordon” for eternity. Judas is starting to have himself a decent pro career in Clipperland