To say it has been a topsy-turvy start to 2022 for Liverpool FC is an understatement. We expected the Reds to pick up where they left off in season 2022/23. That is not what happened.

There have been a lot of excuses. Injuries, fatigue, FSG’s lack of investment, the sale of Sadio Mane and even Jurgen Klopp were among some theories bandied about online and on-screen by football pundits. Virgil van Dijk posited that the unusual timing of the World Cup has had an ‘unusual effect’ on the Liverpool dressing room, too.

We’re not here to solve that riddle, however. What we are here for is to have a look at Liverpool’s season so far. Read on with caution, Kopites, this will not be pretty. Liverpool FC had an interesting transfer window. Things didn’t really kick off until the sale of Sadio Mane was finalized. Once the irreplaceable Senegal forward left for Bayern Munich, it seems the strategy pivoted from strengthening the midfield to trying to shore up Liverpool’s attack. That resulted in the signing of Uruguayan Darwin Nunez from Benfica in Portugal.

Despite suggestions that Nunez has struggled to adapt to the English game, the stats tell a different story. The striker has contributed eight goals in 16 appearances across the Champions League and Premier League. That is a return to be proud of and easily puts him inside the top ten as far as goals to games ratios for new Liverpool strikers.

There was the red card against Crystal Palace. That is proof that he still has a lot to learn. That shouldn’t surprise anyone. In fact, when Liverpool signed the prodigious young striker, Jurgen Klopp made these remarks.

“You’ve got to get the guy in, get him playing. Get him minutes on the field and get him in tune with everybody. And until you do that, you won’t get the best out of him.”

“As we all know, he’s not the finished article; he’s still very raw.”

It seems these comments have been lost on some Liverpool fans.

Elsewhere, The Reds signed Scottish right-back, Calvin Ramsay and Portuguese, attacking midfielder Fabio Carvalho. Ramsay has barely featured because of injury but has shown signs of promise in his limited minutes. Carvalho is still getting in sync with his teammates, but has shown plenty and already has a last-minute winner to his name in the Premier League. We think both youngsters will feature heavily in years to come. On the pitch, this version of Liverpool has been both hard to watch and scintillating. The bipolar nature of their performances means their league position is a fair reflection of where they are at this season.

Jurgen Klopp has even flirted with changing his system. There have been a couple of different shapes tried this season, something that has been unthinkable in previous campaigns.

Their performances against Napoli, Nottingham Forest, and Leeds were horrible. Completely foreign to the Reds’ side, we have become accustomed to over the past few seasons.

A notch below those performances were the displays against Fulham, Crystal Palace, and Everton. In previous seasons, Liverpool would have won. Unfortunately for fans of The Reds, that simply hasn’t been the case so far this year.

It hasn’t been entirely awful. Sandwich between those results has been incredible victories against Manchester City and Napoli. There was also the thrashing of Rangers in Europe and Bournemouth in the Premier League. The good are few and far between at Anfield this year. Harvey Elliot has developed into a player who is hard to keep out of the first XI. He has found the back of the net both domestically and on the continent. And his passing has been sublime.

Although he has only made a few appearances, Ibrahima Konate has been immense in his limited starts this season. He has been easily Top of the Pops when it comes to defenders.

Without a doubt, the shining light this season has been goalkeeper Alisson. The Brazilian has been a brick wall in goal. It is scary to think where Liverpool would be without him.

Darwin Nunez, who we analyzed earlier, also deserves to be on this list Virgil van Dijk has been poor this season. There are no two ways about it. Gone is his composure and reliability. His positioning and timing has been off, too. It’s too early to tell if he has peaked and is now experiencing a downturn that he can’t recover from. One thing we can say is he has been a shadow of his former self this season.

His defensive partner, at times, this season Joe Gomez has been poor too. He had everything to play for at the beginning of this season. There was a spot for him in the England squad for the World Cup if he played well. He even had the opportunity to establish himself as the go-to partner for the aforementioned van Dijk. He failed miserably. The performance against Manchester City aside, Gomez will be extremely disappointed with his performances this season. 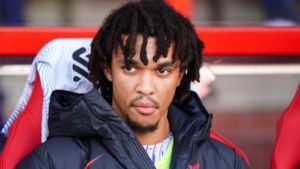 There is no getting around it. Trent Alexander Arnold has been terrible this season. He is clearly not a defender. His superb passing range and attacking prowess can’t be ignored. Arguably, he is the most skillful English player in the game at the moment. But, when you are a right back – foremost, you have to defend. And that has been severely lacking at the beginning of this season.

Fabinho is another who has completely fallen off this season. He has not played to his potential once this season. The Brazilian has been bullied off the ball, found lacking positionally and looked completely lost this season. How he still made the Brazil squad is a mystery. Hopefully, sometime with his compatriots can help him rediscover the form that had some calling him the best defensive midfielder in the world. He might not have long left at Anfield if he doesn’t. Ironically, the World Cup break has come at a horrible time for Liverpool. They have won their last four in a row and seemed to gather some momentum. What the coaching staff will hope is that a mini preseason rights the ship at Anfield. The title might be gone, but the top four is a possibility. Not only that, it is a necessity.

As far as grading them on their season so far. It is below par. Those last four victories just notched their grade above a D.