Liverpool hosts Manchester City at Anfield in this weekend’s Premier League match of the week. In previous seasons, we viewed this match as a title decider. Sadly for Liverpool fans, that is simply not the case this time around.

Jurgen Klopp’s side had a mixed bag in terms of results in the past week. They lost 3-2 to Mikel Arteta’s Arsenal side in their last Premier League match. The Reds weren’t horrible, but still conceded three goals. They have genuine problems in their defense and will continue to lose to the biggest clubs while their back line remains so leaky. A trip to Scotland beckoned next in the UEFA Champions League. What occurred at Ibrox can only be described as a match of two halves. The Scottish club held their own against Liverpool before being blown out of the water in the second half to go down 7-1. Mohamed Salah’s hat-trick, the fastest ever in the Champions league, was undoubtedly the highlight.

For Manchester City, they started the week with a 4-0 thrashing of Ralph Hasenhüttl’s Southampton. The result temporarily put them in top spot, before the Gunners went above them following their victory against Liverpool.

The Sky Blues then followed that up by failing to score in Denmark in their clash with FC Copenhagen. The Danish side didn’t score either, so they at least escaped with a point. What was interesting was that Erling Haaland didn’t make it on to the pitch. Is City already too reliant on his goals? Or are we just grasping at straws? We think the latter is more likely. The matches are coming so thick and fast it is hard to keep up with the revolving door that is the medical room at Anfield. If that is how you feel, don’t worry – that is why we are here. Here are the latest comments from Jurgen Klopp regarding his injured brigade.

“[He] twisted the ankle, not good. Trent never, in seven years, went off if he could have played on. He was in too much pain; it started swelling immediately, so we will have to see.” [Oct 09] 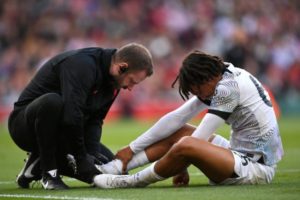 Joel Matip is also missing with a calf strain. He might find it hard to make his way back into the team, with the return of the French behemoth Ibrahima Konate.

Outside of that trio, loanee Arthur Melo is out with a long-term injury. Regular injured trio Naby Keita, Alex Oxlade Chamberlain and Curtis Jones all remain out of contention for this one as well.

This is really hard to read. A lot has been said and written about Liverpool’s below-par start to the season. And they have already had a couple of false dawns that have suggested they are back to their levels of last season. But they have proven to be just that – false dawns.

Manchester City, on the other hand, has been great without being fantastic. Erling Haaland has made an enormous difference, but despite all of that, they are still trailing Arsenal at the top of the table. Both sides will be desperate for the three points, and that could lead to one helluva match.