2022 marks the first full year of the NIL (name, image, likeness) era of college football. We’ve already seen the first national signing day of this brave new world that NIL has ushered in, and the first NIL season will get going with week zero in just 15 days from now. Notre Dame has a new head coach in Marcus Freeman, and he discussed how his brand new regime will handle the NIL situation in recruiting.

All over college football, rules will be broken left and right. Beyond all that, and in much greater capacity, those rules will be bended. What’s breaking and what’s bending? Lord only knows. It will all be very interesting to see how it all shapes and plays out in 2022. It all begins Saturday night when Freeman leads his Fighting Irish into Columbus, to take on his alma mater, Ohio State. PicksforTonight has picks for every game, every day, and they are going with ND +`15. Freeman sees his squad as huge underdogs for his homecoming game. Some spreads have the Irish as two touchdown and a field goal underdogs for this momentous clash.

In fact, it’ll be the biggest game of week one by far.

“You’ve got to show them that you have a plan, but there’s certain rules within the NCAA that you can’t do,” Freeman said at a recent press conference. We can’t say we’re providing this name, image, and likeness deal for you and things of that nature.”

Notre Dame is currently in a New Year’s Six bowl game drought, having not won one of these biggest of the big bowl game contests since 1994, when they beat #6 Texas A&M in the Cotton Bowl Classic 24-21.

They have lost the last nine since games of this sort (yes, we’re counting BCS Bowl games and College Football Playoff Bowl games), so they’ll be incredibly motivated to try and stop the slide this upcoming season.

From 1994 to the 2006 football seasons, Notre Dame lost 9 consecutive bowl games, the most in NCAA history. That streak (which was later tied by Northwestern in 2011) ended with a 49–21 win over Hawaii in the 2008 Hawaii Bowl. They had a golden opportunity to end the drought on this past New Year’s Day, but you know how that went.

In case you don’t, Notre Dame had a commanding second half lead, but totally blew it against Oklahoma State.

The merit and value of non-College Football Playoff bowl games is debatable, but we can all seem to agree on this- they help boost the brand. It has been speculated that Notre Dame might have gone to as many as twenty bowl games during their self-imposed forty-five year hiatus (1926-1969) from the postseason. 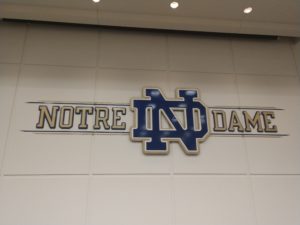 So there was a lot of potential brand building that was missed out upon back then, just like there were deals and money left off the table for the players, until NIL came along. The new landscape provides more rights and privileges for the players, and things have truly gotten real. Freeman was then asked about other schools stepping past the line, in regards to NIL, and how he and his staff are contending against that.

“We do things the Notre Dame way,” Freeman responded.

“I don’t want to do anything that has to do with breaking the rules.” While no one knows what’s going to happen with NIL in this brave new world, we definitely do know this- Marcus Freeman is much easier to root for than Brian Kelly.