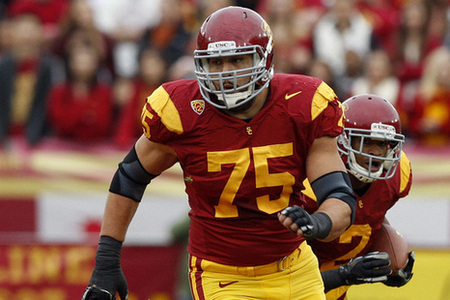 1. Matt Kalil, USC (6-6, 306): With great size and strength, Kalil certainly looks like an NFL tackle. There’s nothing about his game that disproves the eye test. Kalil has a great combination of size and athleticism, displaying very good feet and balance. Will excel against speed rushers, although he does give up ground at times against a bull rush. Plays with the nasty streak that NFL scouts love, he’s a lock to go near the top of the draft.    Prediction: Top-5 Pick

2. Riley Reiff, Iowa (6-6, 313): Possibly the most complete lineman in the draft, Reiff is just as comfortable playing the run as sitting back in pass protection. Certainly has the makeup to be a longtime starter on the left side, but could be elite as a right tackle. Bench press was a little low at the Combine, although he made up for it at his pro day.  Reiff will be extremely reliable and benefits from playing in Iowa’s zone-blocking scheme.    Prediction: Top-15 Pick

3. Jonathan Martin, Stanford (6-5, 312): Martin was unable to participate in the Combine because of an illness. If he were a little stronger, he would push Reiff for the second spot on this list. Mentally sound, he rarely is out of place or fooled by stunts. Very fundamentally sound, rarely loses the leverage battle. Strength and conditioning are the biggest concerns entering the draft, although he should benefit from working with a pro staff.    Prediction: 1st Round Pick

4. Cordy Glenn, Georgia (6-6, 345): A massive prospect, Glenn started his senior season at left tackle. At the next level, he might be better suited as a right tackle or as a guard. He enjoyed an extremely prolific senior season, rounding out as a complete blocker. Scouts have said teams are concerned about his motivation to work. Not as aggressive on the field as you’d expect.     Prediction: 1st Round Pick

5. Mike Adams, Ohio State (6-7, 323): A good case study in risk/reward drafting, Adams has the ability to be an elite pass protector at the next level. But questions about his work ethic and character could drop him on many teams’ boards. Adams was suspended five games in 2011 for trading memorabilia for tattoos. Was also found with drug paraphernalia during a traffic stop in 2009, but was never charged. He certainly has first-round talent; the question is whether a team falls in love with him early on.   Prediction: 1st or 2nd Round Pick 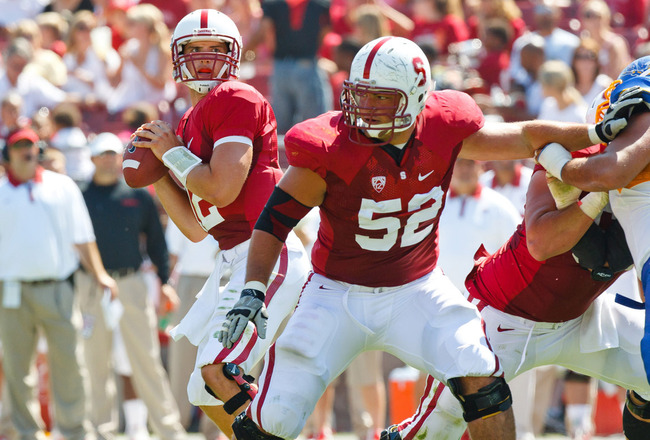 1. David DeCastro, Stanford (6-5, 316): Solidified his position as a 1st round pick at the NFL Scouting Combine. He was simply dominant last season or the Cardinal. DeCastro is a great run blocker and shows surprising footwork when working in space. Will be an above-average pass blocker at the next level. He has a blue-collar mentality and is passionate about the game. Should be a starter from day one.     Prediction: 1st Round Pick

2. Peter Konz, Wisconsin (6-5, 314): Has played just about everywhere on the line for the Badgers, although projects best as a center at the next level. Did not have the best Combine workout, but was better at his pro day and dominates regularly in game situations. He’s at his best when pulling, a rare feat for a center. Konz suffered through a myriad of injuries at Wisconsin, but showed a willingness to play through pain.     Prediction: 1st Round Pick

3. Kevin Zeitler, Wisconsin (6-4, 314): Another road grader from Wisconsin, Zeitler has made giant strides during his career. Actually lost his starting spot in the 2010 training camp because of injury, but worked hard in the weight room and won it back by the start of the conference season.   Will not win every quick-twitch battle, but is hard to lose when he’s engaged in a block. Needs to work on leverage and keeping a good knee bend, but is rarely pushed off his blocking point.     Prediction: 2nd Round Pick

4. Kelechi Osemele, Iowa State (6-6, 333): Played at left tackle for the Cyclones, but will make the move to guard in the NFL. Had a great 40 time at the Combine and has extremely long arms for his build. Already has impressive strength and should be even tougher working on the inside. A better pass protector than run blocker at this point.  Can take plays off at times and needs to improve his conditioning.    Prediction: 2nd or 3rd Round Pick

5. Jeff Allen, Illinois (6-4, 307): Has an average build and strength for the position. Was very productive in his final two years with the Illini. Much more developed as a pass blocker at this point. Allen has a good initial surge in the run game, but will not always finish the block. He would not be characterized as a mauler, and will fit best in a zone-blocking scheme.       Prediction: 3rd Round Pick