Okay really, let’s give some love to the Cleveland Indians.

You read it right, the Indians sit atop the AL Central Division standings with an 11-4 record, comfortably ahead of the White Sox, Tigers and Twins.

Still, saying the words “first place” and “Cleveland” in the same sentence are almost laughable in the sports world and rightfully so. The city, which has three professional sports teams in the Indians, the Browns of the NFL and the Cavaliers of the NBA, has not won a major pro sports championship since 1964, when the Browns won the NFL title and that was before the Super Bowl era.

The Cavaliers have failed to win an NBA championship since they joined the league in 1970-71 and the Indians haven’t won the World Series since 1948, when Bob Feller was just 29 years old. Cleveland is the most tortured sports town in America, but the thing is, they have come so close on numerous occasions.

That’s 47 years since the last major pro sports championship in the city of Cleveland. Think about all that has changed and happened since then. Barack Obama is the eighth President of the United States since then.

Nikita Khrushchev was in his last year of power in the Soviet Union and man had not yet walked on the moon. Michael Jordan wasn’t even two years old yet and Bill Russell and Wilt Chamberlain dominated the NBA. The St. Louis Cardinals defeated the New York Yankees in seven games for the World Series and we hadn’t even been introduced to greats like Mike Schmidt or Reggie Jackson.

While Cleveland has suffered for those 47 years, there are other cities that have been living the good life.

New York hasn’t really had a problem, winning 20 pro sports championships since ’64 and Boston has 18 to their credit. Los Angeles has won 12 with 11 of those courtesy of the Lakers and Chicago, despite the Cubs woes, have won nine championships since Cleveland most recently got it done. Even Green Bay, who only has the NFL’s Packers, has four Super Bowls in the past 47 years.

Chicago Cubs fans like to complain that there team hasn’t won since 1908, but the other four pro teams in Chicago have combined for 21 championships since 1908 so, while Cubs fans may cry, they have had plenty to cheer about in all the other sports. Cleveland fans can’t say the same. It doesn’t matter what season it is there has only been heartbreak and sorrow for Cleveland fans.

The Indians won two AL pennants in the 90’s yet failed to win the World Series. In 1995, they fell to the Braves in six games. 1997 brought another AL pennant, but again the Indians lost to the Florida Marlins. They won their third AL Central title in a row and upset the Yankees in the Division Series, and took care of business in the ALCS.

In 2007 the Indians again won the AL Central crown and featured superstar pitchers Cliff Lee and C.C. Sabathia, but they lost in Game 7 of the ALCS to the Red Sox. Since then they have struggled to win games, never finishing better than .500.

Fans can still see Michael Jordan rise up and sink the game winning jumper over Craig Ehlo. They can see Jordan jump up in the air, fist-pumping in celebration while Ehlo crumples to the floor in defeat. It was Jordan’s game and series winner in 1989 that sealed the Bulls first round upset of the Cavaliers. Five years later, Jordan would hit another game/series winner in the second round of the playoffs against Cleveland. In 2003 the team drafted LeBron James with the first pick in the draft and he was supposed to lead the Cavs to the big one.

The King, as they called him, was a hometown kid and lit up the NBA right away. He led Cleveland to the Finals in 2007, but they were swept by the San Antonio Spurs. Perhaps the biggest blow came this past summer when LeBron went on national television to announce that he was signing with the Miami Heat amid free agency. Cleveland fans felt betrayed by their hometown son and proceeded to burn his jerseys in the streets. 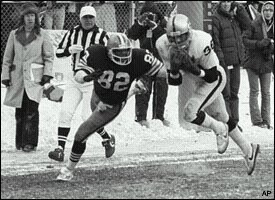 Of course, there are the infamous football plays in Cleveland history such as Red Right 88, The Drive and The Fumble that have haunted Browns fans for forever. The Browns’ outlook isn’t really good for 2011-12, either. If there is a season.

Despite all this, Cleveland fans remain true. The Cavaliers boasted the highest attendance in the NBA this season and the Indians hold the record for consecutive sellouts. The Dawg Pound is a fixture at Browns games no matter what the team’s record is. With the Indians in first place, at what point do the Cleveland fans start believing?

Surely they can’t hold this lead on the division too much longer with other heavyweights in the AL Central, but no matter where you live, you have to sympathize with the Cleveland fans. They have suffered more than any other American sports city. They don’t call it “Believeland” for nothing.