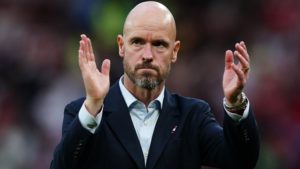 Erik ten Hag might just be the football world’s King Midas, as everything he touches turns to gold. The Dutchman just out-witted Manchester City boss Pep Guardiola, a gaffer who is considered one of the best, if not the best, tactician in the world game.

And now, with a win on Wednesday at Crystal Palace, he and his club can surpass Guardiola and City in the league standings. Yes, by midweek United could be second in table, not bad considering they finished sixth in the league last season. The Ten Hag rebuild is off to a rip-roaring start, and the best is yet to come.

United are currently fourth, but level in points with third place Newcastle, and holding a game in hand on the side that sits directly above them. They’re only one point behind City, the reigning champions and noisy neighbors who have claimed the league title silverware in four of the last five seasons. Remember after week two this season? When United lost 4-0 to Brentford (after having also fallen to Brighton in the opener), all the jokes about this club getting relegated? They were jokes to be sure, but still, the idea was silly at the time, and it seems unfathomably crazy now.

United started a bit slow this season as they hampered by the distraction that was Cristiano Ronaldo. But with CR7 gone now, it’s addition by subtraction. Marcus Rashford is the main man now, and the central star of the show. He’s also currently in as elite form as any individual footballer in the world.

At the end of the day, it’s not just about making the top four and qualifying for UEFA Champions League next season. This campaign is about ending the trophy drought, which now stands at a half-decade. Ole Gunnar Solskjaer was the first United manager since Sir Alex Ferguson retired, on top of the standings in 2012-23, not to win at least one trophy.

Yes, believe it or not, even David Moyes won a Community Shield, and technically that counts. That looks to change this year at Old Trafford. Maybe it won’t be the Premier League title, but United are through to the semifinals of the EFL Cup, and they’re the hands down favorite in that competition.

Through to the 4th round of the FA Cup, it’s another tournament that looks favorable for United, given their draw and the number of big boy teams that have fallen by the wayside or will soon. And of course, United entered the UEFA Europa League as one of the odds-on favorites. Overall, Manchester United are in it to win this year. Plain and simple. They didn’t come to play, they came to slay.