The North Carolina Tar Heels are a college basketball team with seven McDonald’s All-Americans, but a very mediocre record. They have a world of potential, but a very uninspiring body of work in this young season. The strength of this team is their bigs, and those bigs really need to hit the buffet line a few times. It’s time to get them on the Illini Mike Tisdale diet of 6,000 calories a day.

In sophomore John Henson, the Heels have a Wooden Award candidate with NBA potential who goes 6-10, 210 pounds. Yes, he’s about as waifish as he sounds, but NBA GM’s often draft based on potential and upside, and that’s what everyone raves about with Henson.

In junior Tyler Zeller, UNC has a 250 pound 7-footer. But that weight number seems inflated. Still, Zeller’s a Naismith Award candidate, and if he can team with Henson to give Carolina a more formidable 1-2 punch, maybe this team can start going somewhere. 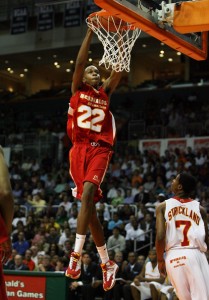 Zeller is the Heels’ leading scorer, ninth in the ACC. He’s also fourth in the ACC in rebounding and field goal percentage. And also the team’s best defender, arguably. Carolina has some talented freshman, but they are still freshmen after all, so they need someone to look up to. Zeller needs to be that guy; if UNC is going to start living up to their sky-high preseason expectations. He was hampered by foul trouble at Illinois, but he can turn it around against a nationally ranked team in Kentucky.

“Illinois is a great team, Kentucky is just as good if not better, so we got to be able to get better between now and then,” Zeller said after the loss.

Coincidentally, Zeller’s younger brother Cody is rated the #15 overall recruit, #4 power forward in the nation by ESPNU. He recently committed to the Indiana Hoosiers and was in attendance at Assembly Hall on Tuesday night, sporting Carolina blue.

Transitioning back to Henson, I have heard from fairly reliable sources that the highly heralded sophomore has a serious physical problem gaining weight, and cannot possibly be dominant in the NCAA and definitely not contend in the NBA with his current frame. He cannot seem to gain any weight during the season, and can only gain weight during the offseason, which is still not going to be substantial.

Still he’s arguably the team’s best player right now as he leads the ACC in rebounding and blocked shots. He’s a double-double machine who scored a career high 19 in the win over College of Charleston, going 8-11 from the field.
He followed that up with another 8-11 shooting performance, 16 points in the loss to Illinois in the Big Ten ACC Challenge.