When I think of the best non-conference rivalries in college basketball, Louisville-Kentucky, Memphis-Tennessee, Cincinnati-Xavier, Gonzaga-Washington State all come to mind.Â  Of course I am biased in saying this, but none of those compare to Marquette-Wisconsin in-state rivalry.Â  Saturday night, the two schools will meet in Milwaukee for the 113th time on the court.

Both the Golden Eagles and Badgers encountered an early bump in the road this season.Â  Marquette ran into a Dayton team that beat them at their own game; pressure defense, hustling, and getting easy baskets off penetration. Every Wisconsin weakness was exploited in the Paradise Jam Tournament title game by second ranked UConn, who utilized their superior athleticism and ball pressure to knock of the Badgers.

Saturday nightâ€™s in-state battle will feature two completely different styles of play.Â  For Marquette, the key to their success is having their defense lead to offense.Â  MU will try to use their athleticism and pressure defense to suffocate the Badgersâ€™ perimeter players and force turnovers which often this season, has led to easy transition baskets.Â  The more Marquette can run, the more they can control the game.

Wisconsin is a very deliberate team on the offensive end.Â  They show an amazing amount of patience and often wind the shot clock down before getting off their best look at the basket.Â  Rarely will they try to push the tempo and Bo Ryan time and time again admits the key to their swing offense is touching the post and trying to get opposing players in foul trouble, which his teams have always been very successful at doing.

Both players really seem to be coming into their own as true point guards.Â  Poor decisions with the ball and questionable shot selection hampered each of them early in their careers.Â  Even though his scoring is slightly down, James has been sensational in handling the ball and getting other players involved.Â  He has a 3.9/1 assist-to-turnover ratio which is an incredible jump from his 1.94/1 ratio during his first three years.Â  James has really struggled at the free line this season though, shooting just 49%.

Hughes has also grown into his own.Â  His field goal percentage is up from 39% last season to 49% this year, including 54% from three-point land, not so much because he has become a better shooter, but more so due to the fact that he is not forcing shots and taking what the defense gives him. This is the position that Marquette really needs to take advantage of if they want to win.Â  Bohannon is an outstanding shooter, though he has yet to find his stroke from downtown this season, but is susceptible with his ball-handling and defense.Â  McNeal makes a living pressuring the ball and should be a major thorn in Bohannonâ€™s side all game long.Â  McNeal should be able to use his strength, athleticism, and quickness to take advantage of Bohannonâ€™s shortcomings on the defensive end.Â  There should be plenty of drive and kick opportunities off of McNeal penetration as the Badgers will have to provide Bohannon with a lot of help defense. Matthews has had his coming out party early this season.Â  Often the third wheel of Marquetteâ€™s trio of senior guards, Matthews leads MU averaging 22 points per game.Â  He has been aggressive on the drive and the offensive glass as he has attempted at least ten free throws in all but one game this season.Â  Not too bad for a 6-5 guy who has been forced to play out of position at the four spot due to injuries up-front for the Golden Eagles.

Krabbenhoft is the definition of a hustle player.Â  He dives all over the court, isnâ€™t afraid to get on the floor, and often ends up bleeding or bruised because of the intensity he plays with.Â  His versatility allows him to play several different positions on the floor and it should be a great match-up watching him guard Matthews.Â  Krabbenhoft really wonâ€™t hurt you with his offensive game, but you better account for him on the offensive glass.

These two guys are nearly mirror images of one another.Â  Each player can handle the ball on the perimeter, shoot the three, have a knack of getting on the boards, and run the floor.Â  Where Landry has the advantage is with his polished game on the low block.Â  He has a variety of post moves and rarely takes a bad shot.Â  Hayward will have to try and neutralize Landryâ€™s post game with his quickness and leaping ability, and must stay out of foul trouble. Offensively, Haywardâ€™s perimeter play should serve as an advantage for Marquette as Landry is an improving shot blocker and will have respect Haywardâ€™s three-point range, hopefully opening up the paint for MU to attack the basket. 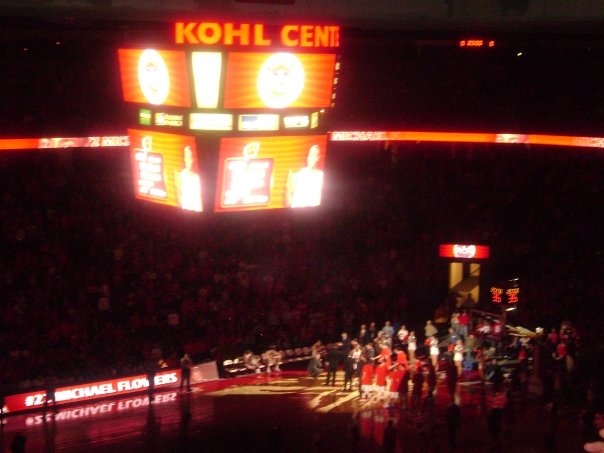 This could be the ex-factor in Saturdayâ€™s game, or has been the case most of the season, a meaningless match-up between two players who are not really that heavily involved on the offensive end and are average at best rebounders.Â  Nankivil is slightly more skilled with the ball and can knock down the mid-range jumper while most of Burkeâ€™s action on offense comes off of crashing the boards and getting put-back baskets.Â  It will be essential for Burke to stay out of early foul trouble as MU is very thin on the front line. Marquette is only dressing ten players (one of which is a walk-on) due to injuries to freshman center Chris Otule and juco transfer Joseph Fulce.Â  Bench play has certainly been a disappointment especially in their loss against Dayton when the Flyers reserves out-scored Marquetteâ€™s, 48-5.Â  David Cubillan and Maurice Acker will need to hit some threes and keep up the pressure on the defensive end.Â  Patrick Hazel and Jimmy Butler will need to stay out of foul trouble and provide some rebounding when called upon.

Wisconsin has gotten tremendous contributions from their sixth man, 6-10 sophomore Jon Leuer.Â  He is a dangerous three-point shooter, but also added some strength to his thin frame and has shown the ability to attack and finish at the rim.Â  Freshman point guard Jordan Taylor doesnâ€™t run the offense like a rookie, though he is not much of a threat as a scorer.Â  Tim Jarmusz and Rob Wilson have both played quality minutes on the wing and can knock down the triple. I really think Marquetteâ€™s defensive pressure on the perimeter will be too much for the Badgers to handle and MU should be able to take advantage with their fast break.Â  If the Golden Eagles donâ€™t take a page from the Wisconsin-UConn game in that manner, I would be shocked.Â  Three-point shooting could be the difference maker if either team gets the hot hand or conversely goes cold from downtown.