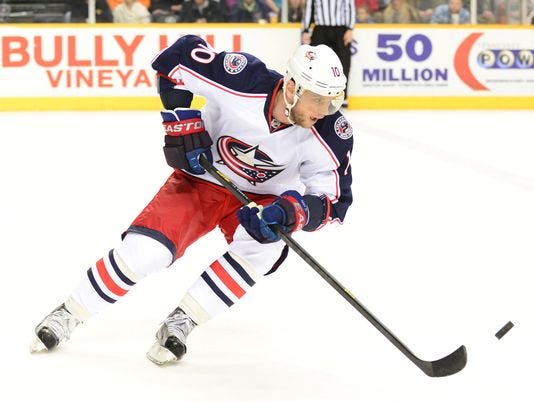 The Columbus Blue Jackets began their season as many of the pundits expected, starting their National Hockey League (NHL) lockout-shortened season by posting a record of 5-12-2 and seemed slated to grab one of the upcoming NHL Entry Draft’s lottery picks in June.  However, ignited by the seismic shakeup at the top of the organization in firing former General Manager (GM) Scott Howson and hiring Jarmo Kekalainen to replace the embattled Howson, the Blue Jackets went on a tear during March, going 8-0-4 for the majority of the month and 10-2-5 going into the NHL’s trade deadline on April 3rd.

With an overall record of 15-14-7, the Blue Jackets and Kekalainen seemed hamstrung:  any designs on nabbing on of the elite players seemed futile, the playoffs, while certainly possible, seemed to be doubtful due to having the majority of their remaining games away from Nationwide Arena, this for a team who has struggled on the road with a 4-10-2 record and the Blue Jackets struggled mightily scoring goals, be it at home or on the road ranking 30th in the NHL in goals scored per game.  The Blue Jackets’ surge was buoyed by the stellar play of their starting netminder, Sergei Bobrovsky, who was named on the NHL’s Top 3 stars for the month of March and is ranked 6th in the NHL in Goals Against Average (GAA) at 2.09 and 3rd in Save Percentage (Save%) at .929.

Kekalainen was placed into an unenviable predicament:  in hockey-mad and savvy markets like Detroit, Boston, Pittsburgh or even St. Louis where Kekalainen served as the Director of Scouting and Player Development, their fans would have been patient and would have tolerated their team taking on the role of sellers with that middling record; however, in a market in which the fans have only once tasted anything which resembled the playoffs or a playoff run, opting to sell off many of their players for the future would have sent a signal that Kekalainen and President of Hockey Operations John Davidson had given up on any playoff aspirations thus ditching Davidson’s mantra of ‘Brick by Brick’.

What was expected of Kekalainen and Davidson was basically the status quo, to sell off some obvious expiring contracts and trading those players for future middle and late-round draft picks; however, what happened was anything but that.

The Blue Jackets and Kekalainen set off a signal that they were ‘going for it’ by being the trade deadline’s big impact participants.  In the waning hours of the deadline, the Blue Jackets traded center Derick Brassard, the former 6th overall pick in the 2006 NHL Entry Draft, defenseman John Moore, their 21st overall pick in 2009 and team agitator Derek Dorsett for to the New York Rangers sniper Marian Gaborik.  If that weren’t enough, the Blue Jackets traded beleaguered goaltender Steve Mason to the Philadelphia Flyers for Flyers’ backup goaltender Michael Leighton and acquired forward Blake Comeau from the Calgary Flames for a 5th round pick in the upcoming NHL Entry Draft.

However, in ‘going for it’, Kekalainen masterfully balanced appeasing the long-suffering fans desperate for a taste of a playoff run while not causing any damage to their core of prospects, projected franchise mainstays or to their bevy of 1st round draft picks, this summer.

While Brassard has shown glimpses of elite playmaking ability, there was also a belief that he was expendable for the right price and, in some circles, was considered a borderline bust based upon what he was drafted and designed to provide to the organization.  Moore, while a spectacular skater in the mold of legendary former NHL defenseman Paul Coffey, never demonstrated at any level the ability to contribute offensively nor had shown defensive shutdown capabilities with disappointing +/- statistics at both the NHL and American Hockey League (AHL) levels.  Additionally, Moore appeared to be the ‘odd man out’ of the Blue Jackets deep defensive corps and would have been expendable when 2nd overall pick Ryan Murray returns next season from shoulder surgery.  Of the three departing Blue Jackets, Dorsett will probably be the most missed and the most embraced by Blueshirts’ faithful.  While not the greatest physical talent, Dorsett exhibited great heart and was a beloved locker room guy and Blue Jackets’ fan favorite.

The trade of Mason was a blessing for both the player and the fan base as, after three horrid seasons, this after claiming the Calder Trophy as the NHL’s rookie of the year in 2009, he had become the symbol of the team’s struggles and his relationship with and admiration of the fans had dissipated.  Mason seemed to be a ‘change of scenery’ player but it appeared unlikely after four seasons of struggles that anyone would take a chance on reclaiming the once-revered netminder.

Gaborik, while believed to be one of the players ‘in play’ at the NHL trade deadline, was not believed to be on the radar of a team like the Blue Jackets.  Gaborik’s relationship with Rangers’ coach John Tortarella soured during the season as Gaborik struggled after coming off of off-season shoulder surgery and the oft-sensitive Gaborik appeared to clash with Tortarella, whose reputation as a demanding, tough coach is well-known and documented.

There were concerns with Blue Jackets brass that history might repeat itself in acquiring a high-scoring forward who might be abject to leaving an elite organization to come to one of the NHL’s outposts as was the case when Jeff Carter did his best version of Greta Garbo, reclusively hiding at his Seaside, NJ residence when learning of being traded to the Blue Jackets prior to the 2011 NHL Entry Draft.  However, Blue Jackets veteran forward Vaclav Prospal, a former teammate of Gaborik’s, spoke to Gaborik and reassured him that he would be joining an organization that was on the rise and would have valued him, greatly.  In fact, in addition to Prospal, there are also two other former Rangers teammates in Brandon Dubinsky and Artem Anisimov so there is a familiarity with former comrades and should help ease any concerns about fitting into the Blue Jackets locker room.

While Gaborik may have struggled this season in the Big Apple (New York), he was coming off of a 40-goal campaign during the prior season, the third 40-goal season of his career two of which were in three of his full seasons with the Rangers.  Gaborik has also netted over 30 goals in seven of his ten full seasons in the NHL and has registered 669 points in his NHL career over 759 games.  He is considered one of the fastest players in all of hockey with tissue-soft hands, transitory one-on-one moves in the open ice and a blistering wrist shot making him an offensive menace.

However, despite all of those elite scoring skills, there is a risk with Gaborik: the ‘injury bug’.  Gaborik has struggled over the course of his NHL career to stay healthy having missed 180 of a possible 939 games and 164 games missed due to injury over 574 games potentially played over a seven season span (2003-2011, excluding the NHL Lockout season of 2004-2005) with injuries ranging from hip, groin, back as well as a concussion suffered towards the end of the 2010-11 season.

Despite this injury risk, Gaborik does bring to the Blue Jackets a solid locker room presence and a speedy, sniper’s presence to compliment their two young, smallish forwards in Matt Calvert and Cam Atkinson.  And for a team who struggles to score goals, Gaborik provides the type of offensive impact that could help decide the numerous 1-goal Overtime and Shootout games that the Blue Jackets have often found themselves in, including their 8-0-4 run.

As to salary cap implications, Gaborik’s contract, while steep as to annual salary, is of minimal risk beyond next season as Gaborik is eligible to become an Unrestricted Free Agent at the end of the 2013-14 season.  In the interim, assuming that the Blue Jackets will focus their efforts during the upcoming NHL Entry Draft on obtaining speedy, physical forwards, particularly in the 1st round where the Blue Jackets have three 1st round picks, Gaborik can serve as both a mentor and a possible stopgap scoring solution should the Blue Jackets opt to not re-sign Gaborik at the end of the 2013-14 season.  So, salary cap-wise, acquiring Gaborik is a low-risk, high reward move.