After a five-month dizzying ordeal, forward Rick Nash has been traded from the Columbus Blue Jackets to the New York Rangers in exchange for forwards Artem Anisimov and Brandon Dubinsky, defenseman Tim Erixon and the Rangers’ first pick in the 2013 NHL Entry Draft.  The Blue Jackets also send to the Rangers a conditional 3rd round pick in the 2013 NHL Entry Draft as well as minor-league defenseman Steven Delisle.

While I view the trade, on the surface, as neither great nor devastating in the overall sense, with consideration to all of the parameters and the length of time needed by Howson to make this trade, I feel the trade is simply a case where Howson, in baseball jargon, was entrusted by ownership to hit a home run and   and settled for, at best, a ground-rule double.

Since Nash’s request to be traded back in January, Howson has had over five months to broker a trade of his elite, franchise player to Nash’s approved list of teams for which he would waive his no-movement clause (NMC): the Rangers, the Philadelphia Flyers, the San Jose Sharks, the Boston Bruins, the Detroit Red Wings and the Pittsburgh Penguins.

In February, there were reports of outrageous demands by Howson in return for Nash.  It was reported that the Howson demanded a package of Derek Stepan or Brandon Dubinsky, Michael Del Zotto, two of prospects Chris Kreider, Christian Thomas or TJ Miller and the Rangers’ 1st round draft pick although the counter-offer by the Rangers was believed to be somewhat less.

However, an offer from another team was believed to be the best offer for Rick Nash as it was rumored that the San Jose Sharks offered center Joe Pavelski, either Ryan Clowe or Jamie McGinn (later traded right before the actual trade deadline when the rumored trade fell through), Sharks’ top prospect Taylor Doherty and their 1st round pick in the 2012 NHL draft.  The reported sticking point by Howson was his insistence on obtaining Logan Couture in return for Nash, something Sharks GM Doug Wilson felt was a “non-starter”.

Howson opted to not trade Nash by the NHL trade deadline and wait until the period between the NHL Entry Draft and the Unrestricted Free Agent (UFA) signing period, when teams would apparently have more salary cap room, to move Nash.

What followed were a series of gambles and more evidence of risk-aversion and outrageous demands by Howson.  Howson received solid offers from two teams not on Nash’s list, the Carolina Hurricanes and the Ottawa Senators.

Hurricanes GM Jim Rutherford made a serious offer for Nash, rumored to be top prospects Zac Dalpe, Zach Boychuk, Ryan Murphy and their 1st round pick in the 2012 draft.  However, it was rumored that Howson wanted Hurricanes’ young forward Jeff Skinner in the package for Nash, something Hurricanes’ GM Jim Rutherford wouldn’t consider.  Adding to the squashed trade discussions was that the Hurricanes weren’t on Nash’s approved list and Nash wouldn’t consider adding other teams to his list.

The Senators were believed to have offered goaltending prospect Robin Lehner, 2011 1st round pick Mika Zibanejad, Nick Foligno (who was later traded to the Blue Jackets in exchange for defenseman Marc Methot) and the Senators 1st pick in the 2013 Entry Draft.  Again, not being on Nash’s approved list of teams squashed any further trade discussions.

As neither trade was ever formulated, Howson opted to wait until the UFA signing period began, specifically to see where topUFAtargets Zach Parise and Ryan Suter would end up.  Howson was believed to wager that Suter and Parise would sign with separate teams, thus creating a market for Nash from those teams who felt jilted by the two desired UFAs.  When Suter and Parise stunned most observers by signing with the same team, the Minnesota Wild, Howson believed those teams on Nash’s approved list would up the ante and make a slew of serious offers.  But none of the teams took Howson’s bait thus creating the prospect of Nash remaining with the Blue Jackets, a situation considered ugly by all parties involved.

That was not without what was believed to be a tremendous offer by the Detroit Red Wings for Nash; however, Howson felt the prospect of having to face Nash six times a season was far too risky to consider.

The Flyers tendered an offer sheet to the Nashville Predators for premier defenseman Shea Weber, a front-loaded offer of $100 million over 14 years.  Howson believed that if the Predators chose not to match the offer sheet that it would open up the market for Nash by other Eastern Conference teams, particularly the other teams in the Atlantic Division which were on Nash’s approved list, the Pittsburgh Penguins and the New York Rangers.

Once again, Flyers GM Paul Holmgren impacted the moves of other NHL teams by his sharp, aggressive actions.  In this case, prompting the Rangers to make a run at acquiring Rick Nash.  Thus, today’s trade was consummated.

Here’s a quick analysis of the players acquired by the Blue Jackets for Nash.

Dubinsky, coming off of his lowest point total output, is considered a ‘glue guy’, a great leadership type and is both versatile and defensively responsible.  Anisimov has great play-making potential, great size and a solid work ethic although he hasn’t yet utilized his size nor has great goal-scoring acumen.  Erixon is considered a potential big-minute defenseman and has great all-around upside and bloodlines.  However, as Erixon also didn’t want to play for the Calgary Flames organization and was thus traded to the Rangers for Roman Horak, being traded to the Blue Jackets is, on the surface, an even greater step down. 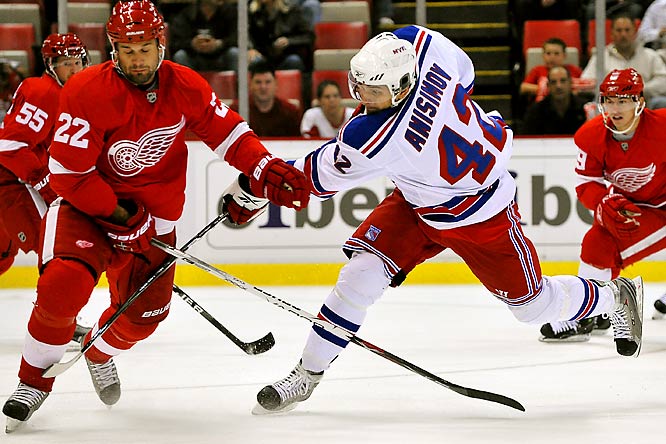 Also, in acquiring Erixon, the Blue Jackets now have a glut of defenseman – currently, the Blue Jackets have nine NHL-level defensemen on the roster and usually six-seven defensemen usually dress for a game.  So such a situation may lead to a trade of some of the defensemen for additional forward line scoring help especially as the Blue Jackets were the NHL’s 4th-worst scoring team – with Rick Nash on the team.

In Nash, the Rangers receive one of the NHL’s true power forwards, a player believed to be an elite performer, someone longing to be surrounded by equally elite talent yet someone who has languished with one of the NHL’s poorest organizations, both bereft of overall talent and in its development of its players.  Nash could finally have the opportunity to compete for the sports’ highest honor, the Stanley Cup.

While I believed the Rangers should have opted to stay ‘as is’ as their young cadre of players and prospects provide the Rangers with both a great depth of forward scoring lines and great defensive pairings, the uncertainty surrounding the status of Marian Gaborik’s injury and a possible lengthy period out of the lineup, combined with the possible infusion of Weber into the arch rival Flyers lineup, may have predicated trading for Nash.

However, in Rangers GM Glen Sather offering much less in return than what was previously rumored to be demanded by Howson, Sather appears to have made a stellar trade, one which possibly places the Rangers as the team to beat in the Eastern Conference.

While some would argue that Nash’s demand to be traded placed Howson in a precarious position, his rumored outrageous demands, many gambles and extreme patience makes the return received for Rick Nash quite disappointing.  Then again, even with a far greater return in a trade for Nash, the forward lines and overall skill level doesn’t appear to have made seismic improvements in their upcoming season’s fortunes, this for the NHL’s 30th (worst) place team during the 2011-2012 season.

In my next article, I will assess the impact of the trade on the Blue Jackets forward lines and defensive pairings as well as their prospects for the upcoming season.