It’s pretty hard not to root for Maurizio Sarri once you learn the extent of his work ethic, and the sacrifices that go along with that. Sarri is a classic Horatio Alger story, as he clawed his way up the managerial ladder one peg at a time. The Chelsea manager came over from Napoli in Serie A this summer, but he’s spent some time managing in Serie C.

The key to his upward mobility has been his devotion to tactical preparations. The Italian will put in 10 hours a day working on his tactics, and hermetically seal himself off in order to do so. Additionally, he will watch two hours of football per day as well.

“My working day usually lasts from 9am to 7pm, then two hours of viewing time for myself,” Maurizio Sarri said to Corriere dello Sport (transcript London Evening Standard), “It’s like a religion.

“I got a house… in Effingham, so they lock me up in my hermitic seal and if they knock, I don’t answer the door. I am immersed in my world.

“I achieved this almost at the age of 60. I don’t need to thank anyone other than those who cared for me, supported me and understood me, but not those who tried to exploit me.

“I spent my time in Serie C, that’s a league that grinds you down and spits you out.” 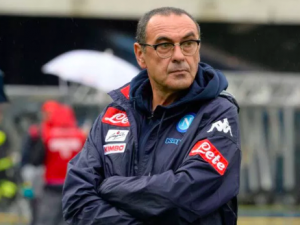 You cannot argue with the results thus far. Chelsea, coming off a fifth place finish last year, are undefeated this season and bonafide Premier League title contenders. Eden Hazard is looking like the best player on Earth right now, as Maurizio Sarri has maximized his talents in a way that Jose Mourinho and Antonio Conte never could.