Donald Trump is the classic example of somebody who just never gets held accountable for his wrongdoing. Whatever the reason, the concept of facing consequences for one’s actions just doesn’t apply to him.

The same can be said for Urban Meyer. You can make strong cases for other individuals being the sports version of Trump, but Urban Meyer totally embodies it. 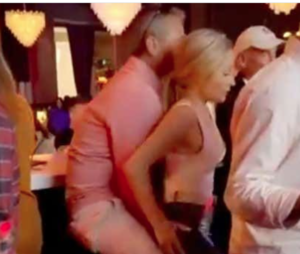 This is about a lot more than just failing upwards- it’s a state of Teflon. Meyer is a bulletproof brand. Nothing sticks to him.

He absolutely crashed and burned in Jacksonville, wrecking that team so badly that the franchise is going to take awhile to rebuild from that disaster hire.

And Meyer embarrassed himself off-the-field as well. You all saw the photos of him grinding on some girl a third his age, right?

At the bar that he himself owns in Ohio? If not, see above.

Urban Meyer’s wife, Shelly, made one public comment on the incident, and it was nothing more beyond some vague biblical sounding stuff. Because it reeks of total hypocrisy. If you espouse a holier than thou philosophy and say ‘God this and Jesus that’ (even if it is just a tool for recruiting players), then you better be squeaky clean.

If you once taught an Ethics course at Ohio State, which Meyer literally did, then you better be on the up and up, all the time. No shadiness at all. And that’s make his quick rebound from the JAX disaster so astounding.

He failed in football, and he also had the viral video/photos moment where he looked like a creepy old man. Yet here was, back on television all the time, as soon as it was football talking season. Given what a national punchline Urban Meyer was, it’s still surreal that BTN and FOX hired him as quickly as they could.

Well, of course FOX had no qualms about doing so. Their brand is synonymous with not having ethics or scruples. Also, everyone seems to forget that he literally covered up domestic abuse, by his wide receivers coach, at OSU.

You guys remember that is why he left Columbus again- the heat on him was about to get too hot for him to withstand.

What Urban Meyer did to enable Zack Wilson would get everyone else canceled. Rolling Stone once reported that he may have covered up crimes committed by Aaron Hernandez when he coached him at Florida.

He’s also seen a very high number of his players get arrested, at every stop of his coaching career. There was that one Big Ten Media Day in which his entire podium session consisted of questions about off-the-field scandal. But again Meyer always escapes just before the sanctions hit his program.

He used some bullshit excuse like some made up health condition as his excuse. And after all this, here we are, the Buckeyes fans cheering for him to come back and coach the team, right after The Game last weekend. They even want Urban Meyer to replace his hand-picked successor.

So how does this happen? How do rules not apply to this man?

That is the power of celebrity in America. Especially if you’re a big brand name, rich white male celebrity. In some ways you’re above the law. The court of public opinion certainly isn’t punishing Urban Meyer. “When you’re a star they let you do it,” Trump infamously said on that notorious Access Hollywood tape. You know, the one where the guy who heard Trump make those abhorrent remarks got canceled while Trump then immediately ascended.

Indeed Urban Meyer gets to play by the same rules as Trump.