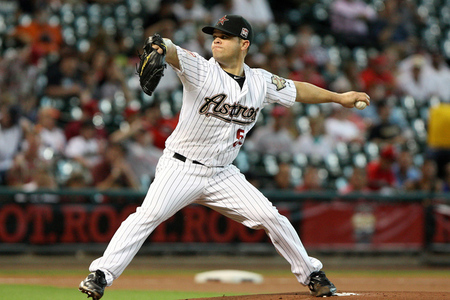 The Pirates, who have set a Major League Baseball (MLB) record for consecutive losing seasons (19), are in the middle of a pennant race, both in the Central Division and as well as in the MLB Wild Card race.

In short, they’re going for it.

In acquiring Rodriguez, the Pirates obtained a veteran left-hander who’s under contract past the end of this season while having the Astros assume a significant chunk of his remaining contract.

“The pitching market is much more plentiful than the position player market,” general manager Neal Huntington said after Tuesday’s loss to the Chicago Cubs. “We had an opportunity to make a move for a player that we liked at an acquisition cost that we felt was appropriate.”

Rodriguez’s contract pays him $10 million this season and $13 million next year as part of a three-year, $34 million contract he signed before the 2011 season. He has a $13 million club option for 2014 that becomes a player option because he was traded.

According to an industry source, the Pirates are responsible for $1.7 million of Rodriguez’s remaining salary in 2012, $8.5 million in 2013 and $7.5 million in 2014. The Pirates only receive cash from the Astros in 2014 if Rodriguez exercises his option.

“While we’ve given up a significant amount in prospect value, we recognize that we do still feel like we have enough to have a very deep system and potentially to make another move or two,” Huntington said.

Pirates manager Clint Hurdle, “I’ve had my eyes on him for a while,” m “He competes. He’s been tough to hit any team that I’ve had.”

Rodriguez should bolster the back end of their solid rotation led by James McDonald and A.J. Burnett, both of whom boast identical 10-3 records.
The offensively-challenged Pirates (23rd in MLB in runs scored and batting average) are still looking to add a hitter. They have had a scout monitoring the Brewers-Phillies series this week, and could have interest in Shane Victorino.
Follow paulmbanks