The claret and blue of West Ham face the red of Liverpool on matchday 12 in the English top flight. Don’t expect The Hammers to boss the game as they did against Southampton. The Irons are likely to sit deeper at Anfield and play more of a counter-attacking style. That of course hinges on the fitness of their defensive options.

It is hard to batten down the hatches with no fit center backs. 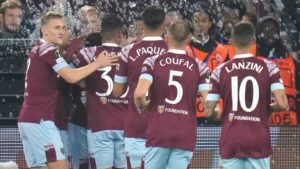 It is not only a potential center-back shortage that makes this a hard mountain to climb for West Ham. In his entire career, Gaffer David Moyes has never won an away league game against Liverpool. He has been in the opposition dugout for seventeen matches and the best he has mustered is a draw, which he has achieved six times. Will West Ham have any fit center backs? Will they play a back three or a back four? Can David Moyes record his first league victory at Anfield? These are the burning questions for West Ham fans heading into this match. We don’t know the answer to any of those questions, but here is how we think The Hammers will line up at Anfield.

This is a tricky match to predict. West Ham may have been disappointing against Southampton, but they still left the south coast with a point. And as poor as The Hammers have been, they only find themselves two points between Jurgen Klopp’s men. David Moyes will fancy their chances against a struggling Liverpool and will probably go for a win. We don’t think they will win, but we think they will match David Moyes’ best away result at Anfield.