Editor’s Note: the original publication where this article was posted has since been eradicated, so we brought this post over to The Sports Bank before it got deleted. It originally ran in November of 2011.

In today’s college basketball landscape, Twitter, Facebook and other social media sites are having more of an impact than ever.  At Media Day, I had a rather thought-provoking and exclusive conversation with the Minnesota Golden Gophers Head Coach, the legendary Tubby Smith about all the media issues that can affect his program, the Big Ten and beyond.

“I’m not very savvy with it, but I know guys can, in the heat of battle say I’m coaching and there’s a bad call and I got a cooling off period, but because you’ve got this little thing that you can go to and share, and later you go ‘oh I really didn’t mean it that way.’ But at the heat of battle you felt that, because you haven’t had time to think about it, to get somebody else’s opinion,” Tubby Smith said about Twitter. Tubby Smith knows how powerful social media can be.

“Anything you say can be taken in so many different ways and I tell players this: if you’re out partying, look at how it ruins kids lives, ruined programs. I don’t think they understand what kind of impact it has on them later on in life. If I have chance to evaluate someone who’s going to be on my staff, and go check out everything on Twitter or Facebook, and there’s something I don’t like, you’re probably not going to get hired. Or recruited. Now why would you want that?

Just because you want to stay in touch with somebody? Pick up the phone. If they’re friends with you they’ll call. 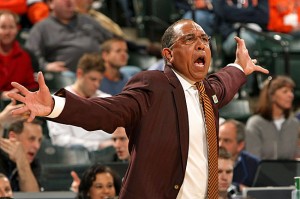 They’re not a friend just because they text ya or tweet ya.

It’s a necessary thing and you can see how it can be used for good and bad, which I guess you can say about everything in life. And we instituted a policy with our guys, it’s like doing an interview with the media, be careful,” Tubby Smith said.

Naturally, I turned our discussion towards the media industry in general, or “old media” if you will. I brought up Marshall McLuhan’s famous saying “the medium is the message.”

“I try to read into who said it, and why it was said, and most people don’t do that. They just read it and boom (no further analysis). It’s like if a sports figure makes a comment, and I’m mature enough to know that they caught him after a game, maybe throwing his helmet after he was upset. That’s why you have quiet times in the locker room. That’s the thing about coaching and playing athletics, it’s an emotional thing. You’re high-strung, most coaches and athletes are. That’s why they’ve reached the heights that they have reached, it takes real discipline.

We have good people like a Don Shelby in our media market that you know you can trust. But there’s so many news outlets that are biased now because everybody’s trying to influence, if not control the message. Just give us the news, we don’t need the sensationalism.

So as soon I see the sensationalism come out, I think “I wouldn’t trust that guy, that news station.” I don’t care about all these other talking heads, whether they’re left or right, I don’t really have much use for ‘em. That may be old school, but that’s just me,” Smith said. Next Tubby Smith discussed just how much power and influence the news media can have on people.

“Most people are very gullible, most people fall for a Bernie Madoff, because of greed and other stuff. You tell ‘em what they want to hear, and you tell a fool foolish stuff and he’s going to become a bigger fool. It’s what he’s looking for. Like I tell my players, you associate with that group. Pretty soon you’re going to be with that group.

Who you listen to- that’s what’s going to shape who you are. Hate to say it, but if you want to listen to a bunch of garbage- garbage in, garbage out. And it’s unfortunate that we’ve come to that now today in society. There really is lack of communication, and you can be influenced, and the masses can be controlled,” he said. And the end of our interview I had Green Day lyrics “don’t want to be an American Idiot, one nation controlled by the media,” in my head. And they’re very accurate, poignant words.