Unlike the 2006 St. Louis Cardinals, this 2009 team isn’t moving towards October with the momentum of a freshman girl’s hangover from mixing Blue UV vodka, pink lemonade, and a few shots of Sauza tequila. Instead, the Cardinals are vying for home field advantage, and are gaining confidence and strength faster than the main boss at the end of Bioshock. And unlike the end to that game, the Cardinals won’t be an easy out when it comes to finishing the job. 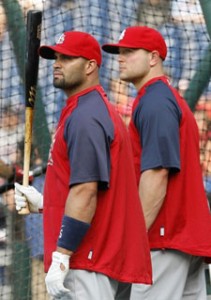 It’s safe to say that St. Louis has surprised nearly everyone this year, including me partially. That’s only because I refuse to believe the Cubs will meet anyone’s expectations year in and year out, and lo and behold, my winning streak stands at six seasons. The 2006 World Series team is Michael Jackson since 1990; they were only covered because it was obligatory even though they sucked, and it became increasingly difficult to watch until their finale, when everyone tuned it. The 2009 Cardinals are Jackson’s old self; they look good without constant facelifts, and just by watching them play you can tell something special is brewing.

In honor of the home stretch to October, I’m going to focus this column on a few key statistics and occurrences that have St. Louis sitting pretty in the NL Central and race for the World Series.

Those are Matt Holliday’s statistics since becoming the vice president to POTUS Albert Pujols on July 24. But like the Bush Administration, the vice president is doing most of the damage/work and leads the team in all four categories since that date. Just for reference purposes, Pujols’ has a .299 BA, .346 OBP, 7 HR, and 20 RBI in that span. And unlike the previous administration, the Cardinals’ VP is causing a bump in approval ratings, or offensive production if you want me to stop using political references. Earlier in the year, the Cardinal offense consisted of Pujols, and then eight other guys who might be on or off depending on the day of the week.

26-9 since Holliday trade
There’s a reason I’m calling the Holliday trade the best of the year, and it’s called the Cardinals’ win-loss record since his arrival. Cliff Lee is doing his best CC Sabathia impersonation, but he only goes out every fifth day. Holliday, along with other midseason Red Bird converts Julio Lugo and Mark DeRosa, has stabilized a rookie-heavy lineup with experienced veterans on a day-to-day basis. On top of that, DeRosa and Holliday have good reputations in the clubhouse, which will help the team push through any rough spots they encounter over the next month.

That’s St. Louis’ record since July 1 with Pavarotti, Domingo, and the other guy on the mound. This includes 11 straight wins with Joel Pineiro starting, and Chris Carpenter’s 10-0 record with a 2.17 ERA in his last 12 outings. Pitching can carry a team through the playoffs, and the Cardinals have the most consistent 1-2-3 punch in the National League. You know what you’re getting every three out of five games, which is more than enough to win a playoff series. On top of that, John Smoltz is 1-1 with a 2.65 ERA in three starts for St. Louis, and is considered one of the best playoff pitchers of all time. Dave Duncan deserves some sort of Pitching Coach of the Year Award, but until then I’ll continue giving him the same clichéd props for turning Gandalf the Grey’s into Gandalf the White’s.

$6.5 million, including incentives through 2011
$2 million through 2010, with $2 million option for 2011
Those are the new deals signed this week by the 36-year-old dual dragons in the Cardinal bullpen, Ryan Franklin and Trever Miller, respectively. Franklin has put up amazing numbers as a closer this year, with 36 saves in 38 opportunities and a 1.37 ERA. Likewise, left-handed specialist Miller is 4-0 with a 1.70 ERA and 38 strikeouts in 37 innings. Franklin has had a history of bowing out in the second half, but he has converted 11 straight saves and was a candidate for August Pitcher of the Month. Both relievers have been unbelievably lights out all year and deserved these extensions. Kudos to the Cardinal front office for getting these deals done so the team can focus on re-signing Holliday and DeRosa in the offseason. 5-0, 2.20, 37 K in six starts
Those are the stats for the August Pitcher of the Month, Chris Carpenter. Easily the steal of my fantasy baseball draft, where I took him in the second to last round, Carpenter has looked just as good if not better than his 2005 Cy Young campaign. He is 15-3 with a MLB-leading 2.28 ERA, and was sidelined for a month with an oblique strain. He’ll get Comeback Player of the Year for sure. Fellow ace Adam Wainwright, who leads the team in innings pitched and has compiled a decent stat line of 16-7, 2.47 ERA, and 164 punch-outs, gives Carpenter some friendly competition for the NL Cy Young award. I think it will ultimately go to my favorite pitcher Tim Lincecum, but boy is it tough to be a Cardinal fan right now.

19
That’s the magic number to clinch the division and a playoff spot, but I think it’s safe to say that with a 10.5 game lead on the Cubs and 13 on the Brewers, the Cardinals are guaranteed another division champions banner for the new Busch Stadium. St. Louis is 23 games above .500, Chicago is two, and everyone else is below the Mendoza line and discussing offseason changes. Of course, the Cardinals are still unable to get the love ESPN gives to the Dodgers and Phillies even though they’re playing much better baseball right now, but that’s just the way they like it. Just ask the 2006 team, which was baseball’s equivalent to the 2007 New York Giants playoff run. This team is focused, experienced, confident, and lapping the divisional competition. That’s a scary combination to face when October baseball comes knocking.