Illinois coach Bret Bielema will head up to Wisconsin, the program he led to a 68-24 record (37-19 in the Big Ten) in the 2010s, as an opponent, for the first time. Yes, for the first time in his career, Bielema will be on the road sideline at Camp Randall Stadium. Hopefully for him and the fans of Illini Nation, it will go much better than the last meeting between these two teams.

Facing his former program for the first time ever, the Illini were dominated by Wisconsin, 24-0, in a Homecoming rout that was uglier and more lopsided than that score indicates. For the sake of Bielema, and Illini fans everywhere, hopefully this time around will be more competitive and entertaining.

.@PaulMBanks discussed his optimism on Illinois football early in the season along with Northwestern & Notre Dame on “9 Good Minutes” on #WGNNewsNow. Watch the entire segment from @WGNNews here: https://t.co/t5Q6zF9bAg pic.twitter.com/qeOvGTwazM

See the video and the link in the embedded Tweet above, for my WGN News segment on the Illini, Big Ten and national college football. The current spread on this Big Ten West grudge match is Wisconsin -8.5 with a total set at 44.5.

ESPN Matchup Predictor gives the Badgers a 74.3% chance of winning. Yes, this is will be the first time Bielema visits Wisconsin since the infamous “#karma” tweet, made by his wife Jen, in 2013. Jen Bielema made the tweet while Wisconsin was getting drilled by Arizona State in a 2013 non-conference game, and the national media, from all corners, absolutely hammered her for it.

Badger fans certainly haven’t forgotten about this schadenfreude incident either, as they routinely show up in her @ replies referencing this episode. It really is something, to this day that grinds the gears of Badger backers. But don’t expect anything antagonistic to be posted on Jen Bielema’s social media accounts this week, before or after the game, regardless of the result.

Her social media, in the days surrounding this one, will have content that looks like it would test well in a focus group of PR managers.

This team could easily be 4-0 right now, had it not been for some very questionable officiating in Bloomington. A 31-0 rout of FCS Chattanooga didn’t do much to convince the doubters that Illinois is for real, but they’re way better off than many of their conference rivals right now: Purdue, Michigan State, Iowa, Northwestern, Nebraska, Rutgers etc. Chase Brown is very quietly the nation’s leading rusher, as Thursday saw him run for 100+ yards for a school-record fifth-straight game. In the same contest, he even surpassed the immortal Red Grange on the career rushing list. And then you have the Illini defense, which hasn’t allowed a touchdown at home this season.

They’re only allowing 8.0 points per game thus far, and other than Minnesota, it’s hard to name a West division team that’s looked better thus far. For opponents, the Illini are no longer a cupcake, pencil them in as a win kind of team. Not saying they’ll win the division, but they’re going to win at least seven this year. Paul Chryst and his staff really whiffed on their call that Graham Mertz was a superior option to Jack Coan. While Coan never came close to winning a Heisman or anything at Notre Dame, he was clearly the better of the two options. But the Badgers issues go beyond the signal caller right now. The offensive coaching staff is in a transition right now, from a play-calling stand point.

The offensive line isn’t as Badger like as it usually is, and the defense is a far cry away from what we typically see in Madison. 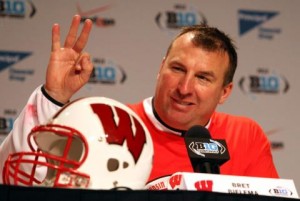 The Saturday night showcase game in Columbus, hyped as a Big Ten title game preview, according to preseason prognosticators, was not ready for prime time.

That game was seriously over by the first quarter, as the Badgers fell to the Buckeyes for the ninth straight time, in an ugly blowout. Wisconsin has been top ten nationally, in scoring defense, six of the last seven seasons. Under Chryst they had never given up more than 21 in a half, before surrendering 31 before the break on Saturday night. This is a very very intriguing one. Given what happened last year, I just can’t pick Illinois to win. And given how meh WIS has looked so far, I can’t pick them to cover. The Wisconsin offense vs the Illini defense keeps this one very close until the end.