Maybe losing, and losing very badly, to a club that annually scraps for relegation will make Chelsea manager Thomas Tuchel finally see the light about Christian Pulisic. Even with Raheem Sterling and Kai Havertz on very little rest, and Callum Hudson-Odoi going out on loan (more on that in a bit), Pulisic was still relegated to bench duty today, in the 2-1 loss at Southampton.

Pulisic played 25 minutes in the season opener against Everton, only six against Tottenham, 26 in the blowout loss Leeds, 15 in Saturday’s 10-man win over Leicester and 24 today versus Saints. But it gets even worse.

According to multiple reports, Pulisic will not get his wish to go out on loan this season.

He will be staying put once the summer transfer window closes on Thursday night. Havertz and Mason Mount, two players that have started every game ahead of Pulisic this season, have played a combined 777 minutes this Premier League campaign, combining for 0 goals and 0 assists. This is just madness, pure madness by Tuchel. Pulisic isn’t allowed to leave, but yet he can’t get significant playing time either.

At least Hudson-Odoi got his wish to leave, and if you’re a Chelsea attacking player, leaving Tuchel’s system is certainly a good thing. Just look at Timo Werner scoring a hat trick today, now that he’s back with RB Leipzig.

Hudson-Odoi will spend the (rest of this) season on loan with Bayer Leverkusen, with the deal officially completed and announced today.

The 21-year-old English international hasn’t really come close to living up to his hype or paygrade yet, over the course of his 126 appearances with the west London club, but who knows, maybe this will give him the confidence he needs to re-kickstart his career. 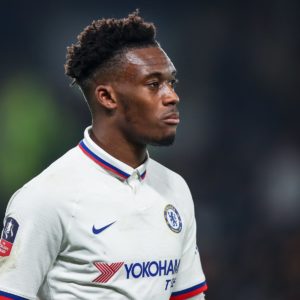 Despite already having a $850 million squad at his disposal, Tuchel has called for more signings to be made before Thursday. Well, they have to do something- as what’s happened so far this season is very unacceptable.