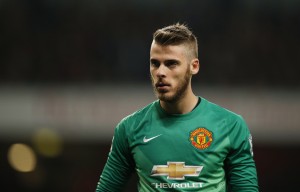 Huge news for the Manchester United community breaking today, as the team’s starting goalkeeper for nearly a decade, David de Gea, is moving on once this season ends. The Spaniard’s contract expires in June, but United still have a club option to extend him one more season.

Conventional wisdom maintained that MUFC were going to indeed exercise that option. However, according to a report in Sky Sports Germany, that will not be the case.

News De Gea: We‘ve been told that #MUFC – at this stage – is not considering to pull his clause to extend for one more year. Ten Hag is open to get a new No. 1 but the player would like to stay beyond 2023. Current salary between €18-20m/year confirmed. @Sky_Marc @SkySportDE ?? pic.twitter.com/aF7IbjvQOg Manager Erik ten Hag is open to moving on now and finding a new No. 1, but the 32-year-old Madrid native would like to extend his stay beyond 2023. De Gea has had a really nice run at United, winning trophies and achieving glory. There were some lean times, in the mid-2010s, when #DaveSaves carried this team all by himself.

His current salary is in the range of €18-20 million a year, and Old Trafford is looking to get him off the books, so they can free up more cash for the Ten Hag rebuild of the roster. It will be interesting to see how the squad is reshaped at the goalkeeper position now. When Dean Henderson comes back from loan at Nottingham Forest will he be the news No.1? Or will they sign a replacement for De Gea in one of the next two transfer windows?