D.C. United finished bottom of Major League Soccer’s Eastern conference this season, and with a mere 27 points from 34 games, they also had the worst overall record of any MLS team this year.

When former Manchester United superstar and ex-Derby County manager Wayne Rooney returned to Washington as a head coach, the former D.C United striker gave the club an optimistic outlook on their chance of success. However, as the MLS playoffs are ongoing, there’s no sign of the Black-and-Red, who conceded more goals (71) than any other squad while finishing the 2022 season with the least points from both the Eastern and Western conferences.

Red flags are forced to wave when you lose more games, concede more goals, and collect the least points from all 28 clubs in the MLS. That said, Rooney has only had four months in the managerial seat, and his dismissal isn’t necessary yet! 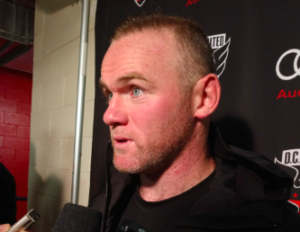 Rooney was hired as the head coach of United following his departure from Derby County in June of this year and is now facing a monumental task in the U.S. after his squad’s embarrassing end to the MLS season. Completing their campaign with four consecutive defeats hasn’t put much faith in Rooney’s arrival, and a 5-2 season closer against FC Cincinnati summed up 2022 for D.C. United in a nutshell.

“Massive thank you to all our fans for your continued support throughout the season,” Rooney wrote on Instagram. “Big improvements needed, and we’re ready for the challenge ahead. Preparation for 2023 is already underway! #DCU”.

The club was at rock bottom of the MLS table before his arrival and has remained there despite his leadership. However, Rooney hasn’t lost sight of why he returned to the states and he understands that it’s a long-term project: “I’m rebuilding a club, rebuilding a squad, and a big attraction is working with different nationalities, not just players but staff.” Rooney told the press. “My ambition one day is to manage at the top, and that is what you get at top clubs. I looked and thought it was a great chance to experience it. It’s a chance to take myself out of my comfort zone and develop as a coach. Not enough managers take that risk and challenge themselves by going abroad.”

Rooney is following in the footsteps of fellow Premier League Hall of Famer Patrick Viera, who spent his early managerial career at New York City FC before heading to France and then eventually gaining a full-time position at Crystal Palace, where he’s currently thriving as an EPL coach.

It’s been a lackluster start for Rooney in Washington, but with time, we expect him to find a groove and utilize this stage to evolve his managerial career. That said, he’s taking a considerable risk because a failure in 2023 could be detrimental to his long-term success as a club manager. Changes are already beginning to surface at D.C. United ahead of 2023, one of which includes the arrival of goalkeeper Luis Zamudio. With 105 saves made in the 2022 campaign while playing for Loudoun United FC, there’s a good chance he won’t allow 71 goals like this year’s goalkeeping position group did.

The good news from D.C. United’s appalling season is that Virginia sports betting apps will offer lucrative odds on the Washington-based squad moving forward. And with a plethora of new signings expected, a fresh squad with a new outlook from Rooney can provide bettors with some early-season value. To deliver bet-winning performances, change is needed. And it’s not just the players who are being evaluated. The club has already parted ways with two key front office figures, general manager Lucy Rushton and first-team performance director Victor Lonchuk. Both have been released.

“The club’s on-field performance this season was unacceptable. We owe it to our supporters, our players, and our greater community to compete at a high level,” Jason Levien, co-chair of D.C. United said, said in a release.

Co-chairman Steve Kaplan added: “We are focused on bringing leadership that will work closely with head coach Wayne Rooney and our management team to build a squad that once again competes at the top echelon of Major League Soccer. To accomplish this and to evolve as a club, we felt it was necessary to make this decision and bring new leadership.” While it’s early to make bold predictions, we should expect a brighter future for D.C. United, who are evidently dedicated to rebuilding the club in every way possible. The 2023 season won’t be as painful for United supporters as this term was- that’s for sure.