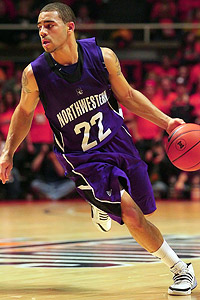 Northwestern hoops has been “sipping on John and Juice” this season. (At least I didn’t make the “purple drank” joke which seemed obvious given the team’s colors). This college basketball season in Evanston, the Wildcats have been led by junior forward John Shurna, the Big Ten’s leading scorer and one of the most underrated players in the country. And senior point guard Michael “Juice” Thompson.

Both are local products; Thompson, the team’s second leading scorer and leading assist man hails from Chicago and played prep ball at Lincoln Park high school. His fellow member of the 1,000 point club, Shurna, is from suburban Glen Ellyn.

(note: the phrase “john and juice” in the title must be credited to the Big Ten Network’s Tim Doyle) “He’s (Shurna) probably bigger and even more athletic in person than he looks on tape. But you don’t really get on film that he’s a pretty strong guy. He doesn’t have that sculpted body, but he’s strong. And he’s very good, he and Thompson really make everyone around them better,” said American Eagles (that’s American University, not the chain of preppy clothing stores) Head Coach Jeff Jones after their 78-62 loss to Northwestern.

“they keep coming at you offensively. they force you to defend multiple things every single possession. we’ve played some good teams in Florida and West Virginia and neither of them had the offensive explosiveness that Northwestern has,” Jones said about the Cats.

The numbers convey that statement. NU is the number three point scoring team in the Big Ten, and second in the league in scoring offense.

NU is extremely fortunate this season in their conference single plays. They’ll face the league’s highest #2 Ohio State and second highest ranked team #11 Purdue only once during the conference slate.

They’ll have eight games versus the Big Ten teams currently ranked in the latest AP poll (Illinois, Michigan State, Minnesota, Purdue and Ohio State)  For the sake of their RPI, and therfore their cause in making the NCAA tournament, NU must go 4-4 here. And the only way the Cats can produce a winning conference record is to record some wins over the marquee teams. Which they’ll need to have the proper resume for the NCAA selection committee.

And NU has beaten Michigan State, Illinois, Purdue, Wisconsin and Minnesota all at least once during the past two seasons. And this team is probably better than last year’s bunch or the ’08-’09 squad.

Then they have 6 against the league’s soft underbelly (Indiana, Iowa, Penn State). NU has killed their postseason opportunities in recent years by struggling in these match-ups the past two years. The good news is that the weaker teams are weaker than they’ve ever been in 2011. No excuses not to go 5-1 or better in those six contests.

Split the difference or better in the remaining 4 against the team non-ranked, but non-awful league teams (Michigan and Wisconsin) and you get an 11-7 league mark.

Given their strength of schedule (or in this case, weakness of schedule, especially in the non-conference, but also in league play a little bit) NU will need that record or higher to make it March Madness.

And NU has the proper mindset and cohesion to make that happen.

“I used this word the other day, and Jim Phillips said it’s a good word to describe this team; they’re selfless. They play together, they play to win and the passing was very good,” Northwestern Head Coach Bill Carmody said after the team’s final pre-conference tune-up.