We all knew the Illini weren’t a College Football Playoff level team, but it was cool to see them actually get votes in the CFP poll earlier this year. In doing exactly what they should do to a terrible team like Northwestern yesterday, especially on rivalry Saturday, the Illini ended the regular season on a much more positive note.

They came into the day with an opportunity to still win the Big Ten West, and two of the three things that needed to happen, did happen. “Obviously, when Nebraska won yesterday, everybody started talking about that, and our guys just worried about playing this game,” said Illini coach Bret Bielema in the postgame press conference.

“A lot of positive steps for our program. To play Northwestern, a team that we’d lost to six straight times, to play the way we did today and answer the bell. I couldn’t be more excited about this team where we’re at, but more importantly, where we’re going.”

It’s really too bad the Illini couldn’t close the deal on taking the BTW title when the division was even more down than it usually is.

It was an opportunity wasted, and it may not be there again as divisions are set to go away. Which they kind should considering how the East is consistently so much better than the West it is really laughable.

The Illini showed some progress in year two of Bret Bielema, but sadly, it is not as much progress as we all thought had transpired.

You, the Illini fan would have easily been happy with eight wins in August. It’s just that you would have also been very disappointed in eight wins at the time that they were 7-1.

But first some other Illini football resource links. 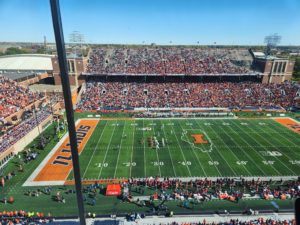 For the current whereabouts of all living Illini head coaches go here.

For the history of Illini quarterbacks, 1980 to present go here Realistic best-case scenario now is to see the Illini land in the pirate ship stadium. Arrrrrrrrrrrrr matey! Avast ahoy! Shiver me timbers and what not. Although the Citrus Bowl in Orlando isn’t totally completely ruled out yet. CBS– Same as above, except this time, South Carolina is the opponent.

Okay, so maybe Illinois hasn’t totally blown the traditionally on New Year’s Day Florida located bowl opportunity yet, as some still believe. But they are below Ohio State, Michigan and Penn State in the pecking order.

Look I’m not saying don’t go to Charlotte, I’m just saying that I’ve been there twice, pretty much against my will both times, and it sucked. It’s the kind of place where the most exciting thing is a shopping mall or an amusement park (you know, the types of things that they actually have everywhere)

Nashville is a fun, cool place. If you haven’t been, I highly recommend it, and be sure to get some of that famous hot chicken. One of the many reasons it’s worth it. It looks like, at least for now that the Illini are not in line for the Duke’s Mayo Bowl. THANK GOD for that, as it’s in Charlotte, basically Indianapolis, but in the south, and placed in the middle of a giant forest. What I mean by that is, it’s a city of about 900,000 people ruled by the banking industry, and INCREDIBLY BORING.

Like St. Louis level boring. For whatever reason, both of these dull ass places regularly host a ton of sporting events. Anyway, let’s see where we are once we’re on the other side of Championship weekend.