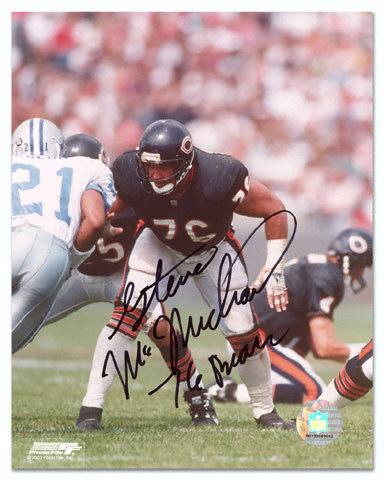 The NFL is the richest, most powerful sports league going these days. Therefore, they have the most money to spend on spin control and message manipulation. However, retired NFL players (and this goes for older ex-jocks across the board in sports, not just football) are almost a million times more quotable than what you hear from athletes currently beholden to the corporatespeak training of NFL public relations departments.

And then there’s Steve “Mongo” McMichael, who’s on another, unclassifiable level. When interviewing him, you can’t really do Q & A with this 1985 Chicago Bears and Texas Longhorns legend.

He’s too smart and interesting for that.

Instead, the process is like a more sophisticated word association exercise. And the end result resembles the feeling of playing a radio controlled boat game at an amusement park. You put an effort in towards steering the vessel in the direction you want, but there’s no guarantee you’ll get to your intended destination. And even if you do, it won’t be via your intended path. Before you get to the core of what “Mongo” is about, you have to first realize that “Mongo” is a character he plays on television; at least when it comes to dealing with the media. Before I sat down for my exclusive with him, on the evening he was enshrined at the college football hall of fame, he confirmed as such.

“All the press around America looks at me like, oh Mongo, he’s going to tell you: f*** you, you vulture. The jig is up. That was an act. It was a good act though, it intimidated a lot of motherf***rs.”

That prompts him to tell me about Ben Hogan’s statement after the golfer came back from a serious car wreck to win the U.S. Open. “There’s three ways to win, you can out-think ‘em, out-work ‘em or you can intimidate ‘em. You put all three of ‘em together and you’re going to win, right?”

Of course, the Bears PR department LOVED an act like this because that organization traditionally has a media relations policy that is as adversarial and combative as possible.

And intimidation also worked well for McMichael within the mythology of “Bear Weather” itself.

“I’m out there with a t-shirt on and my arms bare at the fifty yard line staring at the other team acting like I wasn’t cold. The jig is up, I was freezing my a** off. What you learn playing in cold weather is, you can’t put enough clothes on to stay warm. In ’83, one game when it was 20 below, a wind chill factor of almost 60 below and when you go on the field and realize the steak in your freezer is warmer than your a**, how can you put enough clothes on to stay warm?” McMichael said.

“The more layers you put on, the more you’re slowing yourself down, so just go out there and put up with it. It’s the same as a warm weather game, so you’re in that same rhythm, without all that extra bondage on yourself,” he continued.

Now it’s very impressive that McMichael is drinking hard liquor on the rocks while doing this interview, but his NFL career was even more impressive. Picked in the 3rd round out of Texas in the 1980 NFL Draft by the New England Patriots, Mongo came into his own after being signed by the Bears as a free agent in 1981. He was a starting defensive tackle on the Super Bowl winning team of 1985; and led the team in sacks on the ’88 conference finalist team. He also made two Pro Bowls and once started 101 consecutive games.

And I absolutely LOVED his work on television. So did the committee in charge of handing out a very prestigious and famous award. “I’ve got the angel holding the globe in my ME ROOM. One of my trophies baby, cuz I used guys as foils.”

Especially during the ‘90s when he paired with (and tortured) co-host Mark Giangreco on NBC 5 Chicago’s “Sports Sunday.” I brought up my favorite anecdote, which turned out to be his favorite bit as well.

About halfway through the interview, the extremely attractive PR/Special Events Director of the Hall of Fame politely interrupts us to remind McMichael that he must join the others and take the scheduled enshrinement class photo. The appearance of this 9-9.5/10 elicits a classic “If I wasn’t married”….etc. etc. etc. line that was truly a “you had to be there” kind of moment.

And Mongo ends this flirtatious overture by reminding himself, her, and I guess myself since I happened to be there, where his priorities truly are these days. Full of pride, he proclaims that his two-year-old daughter is in charge these days.