After Steve McMichael was finished with his college, Chicago Bears and NFL careers, he spent four years as a professional wrestler. On the day of his enshrinement into the college football hall of fame, I had the opportunity to interview him. (And it was a pleasant surprise that the media availability hour happened to overlap with cocktail hour of the enshrinement reception)

“Mongo” told me the primary reason he got into wrestling was to again experience the transcendent thrill that accompanies walking out of the tunnel and hearing the crowd, anxious to bestow adoration upon him, roar in approval from his appearance.

But I’ll let him describe this phenomenon in his own words.

“Oh, there ain’t no drug like that. When you walk out of that tunnel baby, there’s nothing in this f***ing world like that adrenaline rush,” Steve McMichael said.

For part one of this exclusive, go here 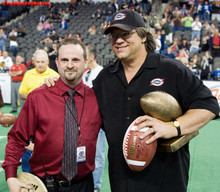 “Lawrence Taylor won’t find it in a pipe. No one’s going to get it filling up their vanity in a bathroom like Roethlisberger. And that battle fatigue guys go through after you can’t play no more, and your career is over, until you come out of the fog with the hairs standing up on the back of you neck- that’s what that is. And it’s like a drug,” he continued.

Steve McMichael’s wrestling record/career seems unimportant compared to the deeper meaning behind it: his motivation for initially entering that arena.

“I thought I’d get it (the high) from wrestling and the fans and RAHRRR!!! There’s a line in that movie Conan the Barbarian, when they throw him down into that pit, and he had to kill or be killed. And the orator speaks:

He did not care any more…life and death…the same. Only that the crowd would be there to greet him with howls of lust and fury. He began to realize his sense of worth…he mattered.

An interview with Steve McMichael reminds me of speaking with Ron Artest, or Ozzie Guillen, and what is said when the cameras are rolling. Like Guillen or Artest, McMichael is a pure example of the Hawthorne Effect in sports media. But if you’re a wrestling fan, you may find that spectacle less glamorous upon hearing Steve McMichael’s insights. His quotes even reminded me of Mickey Rourke’s character in the critically acclaimed film The Wrestler. “Ah yes, the years I spent as a traveling carnie,” he says when I ask him about it.

“Any kid that threatens his parents: I’m going to run away and join the circus, DUMBA** I did that, almost killed me. It’s a guarded secret how much you’re on the road. I was home two days out of the month for clean clothes. Cuz it’s not just tv and the pay-per-view. They do house shows, you gotta drive to another town just for the ticket sales at the arean. That’s where most of the money comes from,” he elaborated.

Today, Steve McMichael is back in football as the current head coach of the Chicago Slaughter of the Indoor Football League.

In 2009, the Chicago Slaughter went 14-0 and captured their first CIFL Championship trophy, averaging over 65 points per game and outscoring their opponents by an average of almost 30 points per game.

“Who knew I knew anything about football huh?” Steve McMichael said about his championship coaching performance.

“Mongo was a character I played to intimidate the other team. And when the other team underestimates you- it’s their ass. Well, it was my pleasure to make them think I was a dumba**” he continued.

I then brought up how much his players must love the game, since they can’t make enough money playing the game to make a living.

“Football is not a game, it’s not your job, it’s YOUR LIFE. It’s a LIFESTYLE; if you want to be good and win. It’s not those two- a game or a business. My as*, it’s YOUR LIFESTYLE. And when you get up in the morning, until you go to bed at night and you’re about that, you’ll be good,” he responded.

I guess that quote says it all. And later, when the Hall of Fame dinner program commenced, we got to hear this famous gem from former college coach Henry Russell Sanders.

“Some people believe football is a matter of life and death, I am very disappointed with that attitude. I can assure you it is much, much more important than that.”

All I can say is- agreed!

For part one of this exclusive, go here