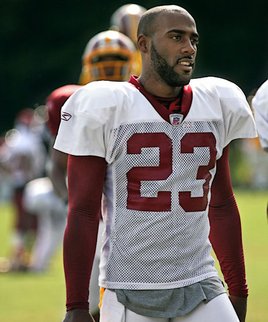 By H. Jose Bosch
If you missed it, DeAngelo Hall attempted to take on the entire Atlanta Falcon sideline Sunday afternoon for no good reason

Granted, any time a single player goes tow-to-toe with an entire team, including its coach, none of his reasons for deciding to take on such an endeavor can be considered rational.

But I’m willing to accept the point of view that you always stand up for your bro, man; unless your teammate blatantly commits a late hit on the opposing quarterback and into the opposing bench.” That or your teammate walks away from the sideline without any incident, or anyone shoving him after a blatant late hit.

Hall, unfortunately, did not think the scenario through. Rather than rushing to the aide of a teammate unfairly roughed up by the opposition, Hall just looks like an ass trying to pick a fight with a team for a petty grudge he’s held for two years. Most of his teammate, though, understands how these things work. Watch the video again and notice just how long it takes for anyone on Washington to actually try and separate the Falcons from Hall.

For all the talk about Hall overhauling his image, he did little to dispel the opinion that all he cares about is himself.

Was he provoked? Probably.

Dan Steinburg at DC Sports Bog does some JFK Zapruder film level analysis of the fight video and I’m pretty sure at the end of it all he determines there was a second shover.

But all you have to ask to end any pro-Hall argument is, “Why was he even there to get himself in trouble in the first place?”

Perhaps this is some of the professionalism Sally Jenkins was talking about?