There aren’t many players in world football who are more iconic or recognizable than Cristiano Ronaldo. A serial winner with a proven track record of consistently performing to a world-class standard, his name has been synonymous with football for nearly two decades.

When Ronaldo first burst onto the scene for Sporting Lisbon, it would have been difficult to find specific markets for the next club he would join. Following the explosion of the internet, betting online has never been easier and you can now find all sorts of football markets with the best online sportsbooks. The popularity of Cristiano Ronaldo is staggering. He is one of only three sportsmen ever to earn over $1bn in his career. He has used his wealth and profile for the greater good, even building a hospital in his home country of Portugal. He was also included in Time Magazine’s most influential people in the world list in 2014. Suffice to say, Ronaldo’s quality is undeniable. He’s a ferociously skilled attacker with a powerful shot and header, and immaculate control of the ball.

He is an iconic talisman who led his national side to the Euro 2016 trophy and is one of the most famous people his country has ever produced. In addition, he also has the most caps for his national side and is their all-time top goal scorer, with 117 goals, finishing top goal scorer in Euro 2020. Still playing, Ronaldo is setting records every year. He became the first player to score 10 hat-tricks in men’s international football at the end of 2021. Manchester United
When Cristiano first appeared in a pre-season friendly against Manchester United, Sir Alex Ferguson immediately identified how much of a precocious talent he was. The then 18-year-old was the stand-out player on a pitch that was populated by an array of incredible talent.

Sporting Lisbon nurtured Ronaldo’s natural ability as a footballer, but Manchester United helped him develop into one of the greatest players of all time. When most people look back at this generation, he and Lionel Messi are considered the standout players of the 2010s.

He went on to lift many domestic trophies, culminating in a season-best performance in 2007/08. During this season, he won the Golden Boot in the Premier League and lifted the Champions League trophy. The United faithful love Cristiano Ronaldo. As a young player, he propelled himself into the starting 11 of a high-quality team and would consistently give 100% for his team and teammates. Real Madrid
Ronaldo was also part of the most expensive transfer in the history of world football, when he signed for Real Madrid in 2009 in a transfer worth €94m (£80m). Although this figure has since been surpassed, it is still a staggering sum of money. In hindsight, it looks like Real Madrid got themselves a bargain. He went on to win two La Liga titles, two Copa del Rays and four Champions Leagues.

Many people consider both players to be two of the greatest players that have ever graced the football pitch, which is an argument that ardent fans of both may never settle. It was in the Spanish capital where Ronaldo staked his claim as one of the finest players of his generation. However, as he closed in on the end of his nine-year stay at the legendary Spanish club, he wanted to challenge himself further, in a new league with a fresh team. Juventus
So, in 2018, Italian giants Juventus made a formal bid of 100 million euros, giving Real Madrid a profit in return for a player who had notched up a staggering 311 goals in 292 league games. Ronaldo’s time at Juventus was successful, with him maintaining an astonishing strike rate of 81 goals in 98 games. During this time, he also spearheaded back-to-back Serie A titles for the Italian side.

Following three successful years at Juventus, speculation was circulating that Ronaldo was in line to join United’s rivals Manchester City. Despite several players and ex-managers like Sir Alex Ferguson trying to dissuade him, it looked like the deal was going to go over the line.

In a spectacular turn of events, he returned to Manchester United, where he had first made a name for himself on the world stage all those years ago. However, despite having a personally solid season, where he notched up 18 goals in 33 games, United went trophyless– not something Cristiano is used to. 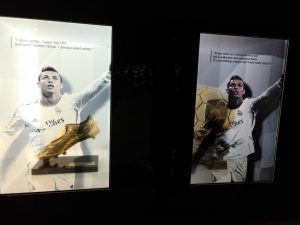 This has led to fierce speculation that he wants out of the club and that new manager Erik ten Hag will be happy to see him go.

Erik ten Hag would be foolish to let a player of Ronaldo’s magnitude leave. However, by the same token, if someone like Ronaldo, who has incredible selling power and marketing stature, wanted to leave, there’s not much Manchester United can do to stop him.

It now looks like United are making moves in the transfer market themselves, eyeing Ajax winger/forward Antony in a deal that looks to be almost done. Again, this could be seen as a direct replacement for Ronaldo, as Antony plays in the same position as the Portuguese talisman. Despite Ronaldo moving into the twilight years of his career, his ability to train incredibly hard, avoid injuries and live a healthy lifestyle could see him squeeze out another five years of high-quality football.
With all these attributes, I think it’s a safe bet that he will have clubs all over the world queuing up for his services. The question is – will he find himself a club before the window shuts in a little over one week?

The rumor mill is in full swing, and with such a short period left in the transfer window, the clock is ticking to see if Ronaldo will join a club this summer or whether he will have to wait until the next transfer window in January.
Bayern Munich have been strongly linked with a move for Cristiano. As have: It is rumored that his partner would like to return to Spain – although this looks unlikely. The best bet may be a return to the club where it all began: Sporting Lisbon. Or, maybe, even a move to Chelsea, who are looking to bridge the gap between the two runaway teams in the Premier League (Manchester City and Liverpool). The most likely outcome is that Ronaldo will stay put and look to help United recover from their disastrous few years. With only one week left in the window, it is more than likely he will have to wait until January next year if he wants a move away from Old Trafford.

However, just as his move to United showed, these transfers can happen quickly, and with marquee players like Ronaldo, there’s no guessing who could win the bidding war for his services this season or the next.