Manchester City look really powerful once again this season. City have won the Premier League title for the last two seasons, and everyone is wondering if anyone can stop them making it three on the bounce. Man City have an even stronger team than last season because the best striker in the world, Erling Haaland, has arrived from Dortmund. Haaland has started this season in sensational form having scored 17 goals in just 11 Premier League games. When we consider the fact the top scorers in the league throughout the whole of last season managed to score 23 goals, it shows just how remarkable Haaland’s form has been.

If the Norwegian international continues at this pace, he will surely break the record for the most goals scored in a Premier League season. Haaland has always scored lots of goals at his previous clubs, but Red Bull Salzburg and Dortmund cannot compare with Manchester City – who are arguably the best team in the world. Pep Guardiola’s squad is packed with world class talent and Haaland is guaranteed to be presented with goalscoring chances given the amount of quality he’s surrounded with. We’ll see if Haaland is the missing cog in the machinery led by Pep Guardiola for City to finally win the Champions League. But despite the fact City are regarded as the best team in England, if not the world, they are still not sitting top of the Premier League table as things stand. Arsenal currently sit top after a hugely impressive start to the season and are two points clear of City having won 9 of their 11 matches.

Manchester City closed the gap on the Gunners after beating Brighton last weekend – a feat not achieved by Liverpool or Manchester United, who both dropped points against the Seagulls earlier in the season. Haaland shone again with two goals. However, a defeat to Liverpool and two draws with Aston Villa and Newcastle United has left the Citizens sitting two points adrift of Arsenal. Perhaps City’s best performance came in the Manchester derby when they demolished Man Utd 6-3. The scoreline was actually kind on United as City led 6-1 at one stage and could have scored many more. A late double by United made the score more respectable than it should have been.

The big question is who are City’s most serious rivals for the title. Liverpool are playing very poorly and are already well off the pace, United are in a transition season under ten Hag, while Tottenham are far too inconsistent. It seems that Arsenal are the surprise package this season and may be City’s most serious competition. Chelsea are improving under Graham Potter so perhaps they may enter the mix, too. We could say that the London duo are currently the closest rivals to City, so the games between these three clubs could well decide who wins the title. Some fans may have thought that they would stroll to the title with the existing squad, but City have shown they are vulnerable. Of course, we can’t expect Man City to win every match and they’ll drop points throughout the season. However, there is no doubt Man City have the best squad and they are understandably the hot favourites to win the league again this season.

Everyone is waiting for Arsenal to falter and for City to take the first position and that’s probably how things will play out. But City fans should know only too well not to take things for granted. Last season, they saw a huge lead over Liverpool melt away and they almost blow the title. Fans should also not get too complacent as many seem to think the title is already won and are encouraging Guardiola to focus on the Champions League. The European Cup is the trophy that continues to elude City so its understandable supporters are desperate to finally get their hands on it. With Haaland leading the line up front this could be the season City win the Champions League, but they still have to give full focus in the Premier League.

Haaland is obviously the big threat now for City but we shouldn’t forget the likes of De Bruyne, Foden, Mahrez and Grealish who create the chances for the Norwegian. Alvarez has also settled well in England since arriving from South America in the summer so City have threats throughout their squad. That strength in depth means Guardiola can go all-out to win both the Premier League and Champions League this season. 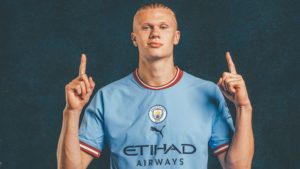 Guardiola will also be delighted that Haaland will get a mid-season break as Denmark won’t participate at the 2022 World Cup. It means the prolific hitman will be well rested ahead of the second half of the season and that could prove pivotal in City’s search for silverware. Plenty of other Man City players will play in Qatar so Guardiola will pray that none of his stars pick up injuries. City have looked formidable at times this season and it’s no wonder it’s becoming increasingly difficult to buy Manchester City tickets in 2022/23.