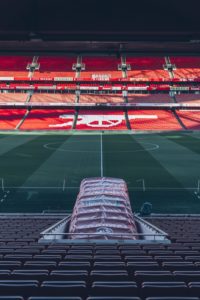 The EPL was at the mercy of Sky Sports with rescheduling this fixture. The media giant would not be rushed in picking a new date, and it seems they played their hand well. Not only do they have a potential Champions League qualification playoff fixture on their broadcast schedule, but it is the only fixture being played across the continent. That is because the Europa & Champions League semi-finals have already been completed. Arsenal head into this game in pole position regarding the fourth place playoff. Not only are the Gunners on a four-match winning streak, but they also sit four points clear in the highly coveted fourth place position.

A win against their bitter rivals here would almost guarantee Champions League football at the Emirates next season. Where is it? Tottenham Stadium, London. Let’s see who misses out for the Gunners in this huge fixture.

First, let’s talk about Benjamin “Don’t Call Me Ben’ White. The Arsenal central defender has been a mainstay in the back line for the Gunners this season; until recently. White has missed the wins over both West Ham and Leeds United with a tight hamstring. Fans of the North London club will hope he can shake off the injury for this fixture.

Spurs have one of the most fearsome forward lines in the league at the moment, so Arsenal will want their first choice defensive line to combat them. In the pre-match press conference for this fixture, gaffer Mikel Arteta appeared upbeat regarding White’s availability:

“I think so. He’s starting to do a little bit of work on the pitch. We want everyone available.” Thomas Partey is looking unlikely to appear again this season. The Ghanaian was showing signs of improvement last week, almost to the point where I speculated he might return for this clash.

I was wrong. The thigh injury sustained versus Crystal Palace at the beginning of last month is still troubling the defensive midfielder, and with few matches to go, it could spell the end of his season.

Scottish left-back Kieran Tierney will watch from the sidelines. He tweaked his knee in training back on the last day of March. After consulting with a specialist, it was determined the best course of action would be surgery. The Gunners have no timeframe on his return, but he is certain to miss the rest of the season.

It will delight the gaffer to have a near full first-team squad to choose from in this must-win clash.