Arsenal FC look pretty serious about their rebuild as they are indeed having a very busy summer transfer window. They have already signed three players this summer (Matt Turner was actually signed in the winter, but completed his move over the weekend) with a fourth (£45m for Gabriel Jesus from Manchester City, as he underwent a medical today) finalizing his move.

So who is next? Possibly Lisandro Martinez, an Ajax defender that they just made an improved offer of €40 million for.

That’s according to ESPN FC, who report also that Arsenal already had a €30m bid rejected for the 24-year-old Argentinian. Ajax are said to want closer to €50m for him, and they just might get it too, especially if Manchester United are interested. New manager Erik ten Hag could raid his former club as he seeks to accelerate his rebuilding project at Old Trafford. It starts with another of his former Ajax players (who is now with FC Barcelona) in Frenkie de Jong.

Shifting gears, Brazilian forward Raphinha is wanted by all three of the big six clubs in London, but Arsenal are not thought to be leading the way right now. Chelsea currently have the inside track, according to The Guardian, who report that Stamford Bridge is close to clinching a £55m deal with Leeds United for the left winger. 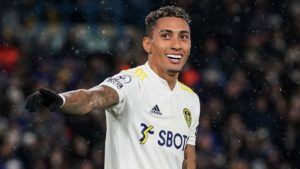 It doesn’t look good for Arsenal, nor for Tottenham Hotspur and FC Barcelona, who are also said to be keen. But who knows, anything can happen at this point. Raphinha is poised to become the second major player to leave Leeds this summer, behind Kalvin Phillips, who joined Manchester City.