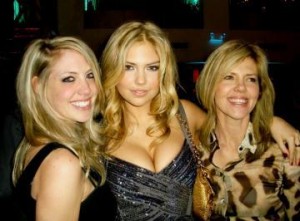 With the Sports Illustrated swimsuit issue dropping yesterday, Kate Upton is the talk of the country right now. So she’s getting plenty of attention. But do you know Kate Upton sister? Laura Upton is an accomplished Georgia Bulldogs equestrian.

I don’t much about that sport other than what I learned about dressage and Mitt Romney’s wife’s dressage horse Refalca. However Laura Upton must be good at her sport because she’s on the equestrian team at an SEC school. Then when you look at her record, she’s among the elite in her sport.

According to her UGA player profile:

Competing individually, she won five world and reserve world titles at the APHA world show in Horsemanship, Hunter Under Saddle, Western Pleasure and Western riding with three different horses…2007-08 (at UGA): The team’s Rookie of the Year Award among Western riders…won the Reserve championship at the Varsity National meet for Horsemanship…posted a 8-4-1 record in Horsemanship, including a 1.5-point win in the season finale vs. TCU at VENC…also posted a 3.5-point win vs. South Carolina at Southern EQ championships…had two MVP rides – vs. OSU and Kansas State

was ranked 4th in Horsemanship in the first-ever Varsity EQ individual rankings… Five time APHA World Champion in Western Pleasure, western riding, and hunter under saddle …also in 2007, she was twice an APHA Reserve World Champion in Hunter Under Saddle and Western Pleasure…Top 5 overall in the nation with three different horses….considers winning world titles in every event she has shown to be her career highlights thus far