Ah ACC college football. There’s nothing quite like it. Well, actually there’s a lot of conferences much better than the ACC, but it when it comes to being not terrible, but still just mediocre to slightly above mediocrity at best, the ACC has you covered…best personified of all by the Wake Forest Demon Deacons.

Last year, the Deacons stopped a two year bowl slide to reach (and lose in) the Music City Bowl to Mississippi State. Not bad,  cuz hey they reached the postseason. But also nothing at all to get excited about. This year they look to be the same kind of muddled middle of the road Atlantic Coastal Conference Coastal division team. 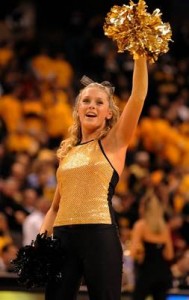 2011 was: a decent start, but HORRID finish. After a 4-1 start, they dropped five of their last six to finish 6-7. How much difference did the four new assistants on the coaching staff make? Well they disciplined the team to take care of the ball as WF set a school record for fewest turnovers and QB Tanner Price hasn’t been picked off in 173 attempts

2012 will go smoothly if:  that supposed speed comes through. Wake has arguably their most talented team in some time but little depth and experience.  Price has to show his veteran saviness and experience to lead this team, and getting to .500 or better will be tough when there’s very little experience in the OL.

2012 will be rough if: they weren’t very good at running the ball or stopping the run last season, and I don’t really see that improving much, especially the latter because the defensive line leaves much to be desired.

Bottom Line: There are some questions on both sides of the ball, especially in the trenches, so reaching a bowl might not happen. They have enough talent to pull off a couple upsets and look like a 5-7 squad.